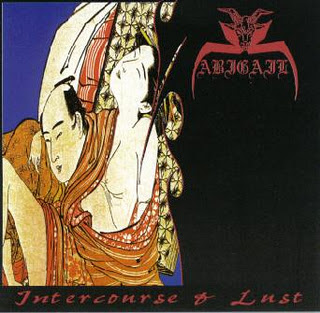 Here's the first album from the self proclaimed "Most evil band in Japan." Intercourse and Lust was released by the sketchy Modern Invasion label in 1997. Abigail's Black Metal is rooted in thrash and punk, the lyrics are brilliant Engrish soliloquies paying homage to things like nymphomaniacal witches, nefarious wizards, and the Yakuza, among other things. "Thrash til Die/To Glory of Attack/Attack with Spell/In my Attack," howls main man Yasuyuki on the track "Attack With Spell." Intercourse and Lust, I almost hate to say it, is a fun album, a record to spin with beer, lots and lots of beer and your bestest bros, and beer.
Here
Posted by Aesop at 1:21 AM

Glad you uploaded this! Much appreciated. I couldn't seem to find this anywhere. I think Yasuyuki is the Japanese metal version of Blowfly. Can't go wrong with Forever Street Metal Bitch and Sweet Baby Metal Slut! His other band Barbatos rules too! Let's fucking metal punk!

Fantastic album; one that I've owned for over 10 years, but I always enjoy reading your write-ups for stuff I already have.

crucial i LOVE this!