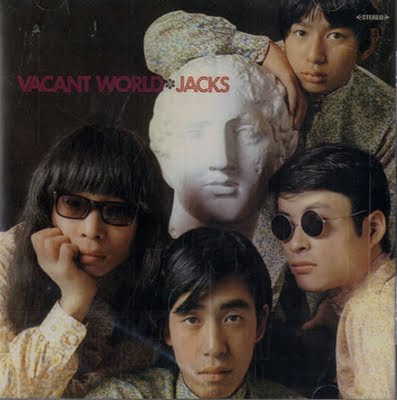 Generally most garage psych records bore me, too much of the same thing, useless cover songs, and most fall just shy of being truly heavy, or truly strange. However, The Jacks' Vacant World is just too enticing to be overlooked. Vacant World carries a darkness and a desperation that pushes it far beyond much of the typically saccharine psych-pop of the time. Some wild vocalizing and absolutely stunning guitar work keep the album interesting. The Jacks gets into gear with "Marriane," with it's strange crashy cymbals and almost free-jazz bass lines, wild styles indeed. "Stop the Clock" is a delicate glockenspielly track. The title track is another dour ballad that almost reminds me a bit of Leonard Cohen, if Mr. Cohen was Japanese that is. "In the Broken Mirror" has some of the greatest sounding fuzz guitar committed to tape, but "Gloomy Flower" is the standout track with Yoshio Hayakawa's pained crooning, the man sounds at his wit's end and although I have no idea what he is on about, I am assured that he fucking means it. "Love Generation" may be the most average track here, but still packs plenty of hooks. "Bari-Manji" is a bluesy lope with more Hayakawa wailing. "Where" is a laid back strut that sounds like it came from a Suzuki gangster picture. "Love" is a gorgeous ballad, and then the Vacant World comes to an end with "500 Miles from the Sky," a strange organ/vocal piece with spoken word. All in all, Vacant World is a trip, and a very satisfying one at that.
Here
Posted by Aesop at 1:53 AM

Welcome back Aesop.
Very cool record this one, got it a while back after reading julian copes excellent Japrocksampler, man that book turned me on to so many excellent records.
This is probably the best, and certainly the strangest, of the group sounds era stuff.

I'll second that--also saw these guys on the great Japrocksampler, among dozens of other treats. More japanese please!

This one gets overlooked in favor of Rallizes, but this is one of the main threads from which all Japanese Underground descends. Hard to appreciate its brilliance on first listen. Thanks!

Wow! First time hearing this, thought I knew what I was going to get out of it by the cover alone and boy I was wrong. I will need to spend more time with it but it feels like a desert disk to me. Radiohead wish they could make an album this good. Thanks Aesop!

A landmark classic. More people need to hear this.