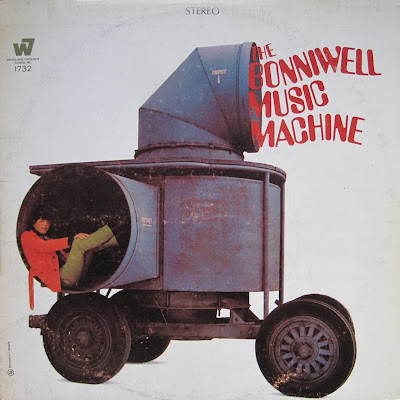 These mop tops started out gigging on the Sunset Strip in 1965 as The Ragamuffins but soon after they changed the name to Music Machine. The band had a couple of minor hits but discord settled in. The band essentially split, but foppish dandy-pantsed frontman, Sean Bonniwell signed to Warner Brothers as Bonniwell's Music Machine. The resulting album was really just a collection of unreleased material by the original band. Maybe lazy, maybe a dirty move on Bonniwell's part but either way it is a great record of vintage dated psych pop deliciousness. Farfisa organs, fuzzy guitars, and Bonniwell's exaggerated vocalizings conspire to create a near perfect album. This is my happening and it freaks me out! Bonniwell passed away a few months back and no one told me.
Here
Posted by Aesop at 12:11 AM

glad to know people care about this group...

Yeah, nobody told me either! I found out from a friend of mine's year-end list of musicians who'd died. Horrible. Sean Bonniwell was a genius. My favorite track on the album you posted is "The Eagle Never Hunts The Fly." So heavy, so awesome. When people talk about the garage rock era as "the original punk rock," they're talking about groups like the Music Machine. They were so fucking good. I totally already have this but I'm really glad you posted it nonetheless.