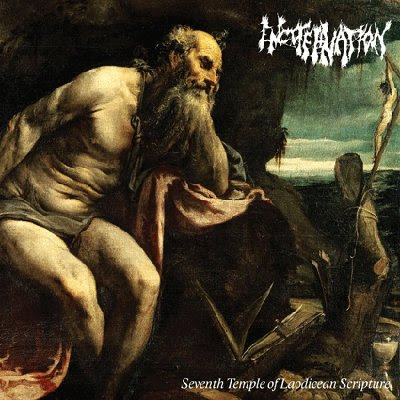 Encoffination are one of the few new bands that genuinely excite me. The logo may lead you to believe that Encoffination are yet another Incantation worship band, and sure, on their first EP the influence was more than obvious, but by their second release, Ritual Ascension Beyond Flesh, the band started to expand on the formula and create something of their own. The two members of Encoffination also operate in the Death Metal ressurectionist outfits Father Befouled and Decrepitaph, both of which are excellent, but Encoffination still remains my favorite. Most of the band's catalog is still in print and should be bought immediately, however I haven't seen many copies of this astounding EP titled Seventh Temple of Laodicean Scripture floating around. It is as great an introduction to this special band as any other release. Worship and support Encoffination, they fucking deserve it.
Here
Posted by Aesop at 12:01 AM

amazing band! their newest LP 'O Hell, Shine In Thy Whited Sepulchres' is a masterpiece. looking forward to digging into some older stuff, Thanks!!!

Hello Cosmic Hearse,
I just became a member of your great blog. I also look towards new members so check out my blog:

yea i absolutely love their newest record. it's put together perfectly.

Great sounds to build a black crown of bones to...makes one feel like a malevolent god-king...but confident in his malice. Fucking sick music.

I love the fact that Ghoat has a day job as a mortician. Doomed to death, indeed.

that is a heavy fucking title for this. had to look up "Laodicean." very heady stuff. cant wait to listen to this!

I've never understood the idea of using another band's logo style unless it's out of pure irony/tribute (See Boris). Is it the same for Encoffination?