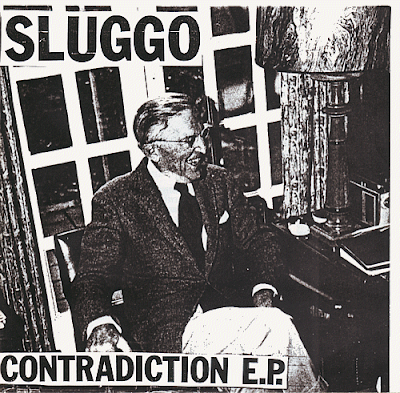 Sluggo were a Hardcore band from Cincinnati Ohio in the '80s. They were kind of like a sloppier (these guys were really young) Minor Threat with a lazier vocalist. Contradiction was their only release and it does everything an '80s HC 7" is supposed to. Apparently these guys got older, and went in a more metallic direction, recordings were made but never released? Anyone want to share those?
Here
Posted by Aesop at 12:02 AM

This is my bread and butter. Glad my punk band never made it. Might have been a fight, as they would have been older than us at the time. We still would've won, though.

Also, I haven't got any of there other stuff, but, if you want some HC I have a boatload...

If you go on slsk right now, it's there. If not, tomorrow I'll med!af!re up ya a link.

Actually, I shoved it up on megaupload instead. In the file there's the .txt with the following:

*released as the Contradiction 7" / Shag Dog. 1


Anyways, I wanted to say thanks for posting Burmese a couple years ago for me to discover. They're frigging great and that cover of Couch Slouch is no joke.So, thank you. Also, thanks for the choice jazzist picks. Cheers.

Thank you very much