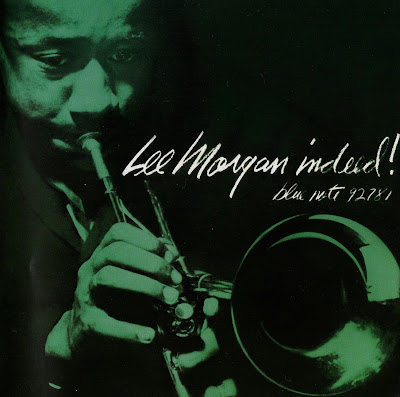 With Jazz the prevailing notion was that a player needed experience to truly excel at his chosen instrument, but when Clifford Brown was tragically killed in a car accident after a gig, it was a young Lee Morgan that filled his ginormous shoes, and caused people to question if experience was requisite to great playing. Lee Morgan was so impressive and prolific a musician it is impossible to think about Blue Note or Bop trumpet playing without Morgan immediately coming to mind. He was an integral part of Art Blakey's best and most noted Jazz Messenger's line up, as well as leading twenty-five sessions as a leader for Blue Note. Morgan's drug use was also the stuff of legend, and in 1961 it led to his dismissal from The Messengers. Morgan cleaned up and in 1963 struck pay dirt with his most successful album The Sidewinder. Over the next decade, Lee was unstoppable as a leader and a sought after sideman. Like Morgan's life itself, his death was dramatic, tragic, and completely unexpected. On February 19th 1972 Morgan's common-law wife, Helen, shot him in the chest on stage, killing him instantly. She served six years for the crime. The bulk of Lee Morgan's massive discography is brilliantly executed standard hard bop, though Morgan was not opposed to more avant styles (Search For New Land). It was incredibly challenging to find a single album to share here so I opt to go with Lee Morgan Indeed, his first session as a leader for Blue Note. Why not start at the beginning, right? The album features a great band: Horace Silver (piano), Clarence Sharpe (alto sax), Wilbur Ware (bass), and Philly Joe Jones (drums). The album kicks off with the vaguely sinister, oddly latin number "Roccus" penned for the session by Silver. Note how the whole rhythm shifts to a fast paced shuffle for Silver's adept solo then returns back to its original creep and lope. "Reggie of Chester" is a classic Benny Golson tune, it was these lilty metropolitan boppers that Morgan excelled at, immediately after the opening riff, he's off hot dogging the valves and showing the haters who the fuck he is. For me, the album's crescendo is the ballad "The Lady." Here Morgan and Sharpe's notes billow and coil around one another like trails from a lonely cigarette in a shitty dive, but then around the 2:13 mark, something (though I am not sure what) happens to the lady. It is a story told through brass and wood, and in a sense, isn't that is what a great Jazz ballad should be? "Little T" is another uptown scorcher this time written by Donald Byrd (that guy had riffs). Philly Joe Jones does a pretty spot on Blakey impersonation on the opening of "Gaza Strip," and Sharpe delivers some of his best soloing on the album. "Stand By" is another peppy Golson arrangement that showcases the talents of Morgan and Silver both. Indeed is a magnificent, but somewhat typical hard bop affair, it is also a great jumping off point to examine the career trajectory of one of Jazz's most beloved and skilled trumpetizers.
Indeed!
Posted by Aesop at 12:40 AM

Hard not to imagine Cronos growling the album title. You're wild, Lee! Wild!

What a gig -- following Brown and Dorham. Lee Morgan rules.

Aesop, it's hard to believe it's actually you doing the writeups for these jazz posts. I'm keep expecting something more along the lines of, "Lee Morgan comes from the bullshit town of... " and "this is some hard bop that really makes my bag tingle." Anyway, I've been digging your posts for at least two years now and wanted to say, "Thanks!"

Your jazz posts have almost single-handedly broken me out of a lifetime of jazz phobia. I figure that's worth a comment.