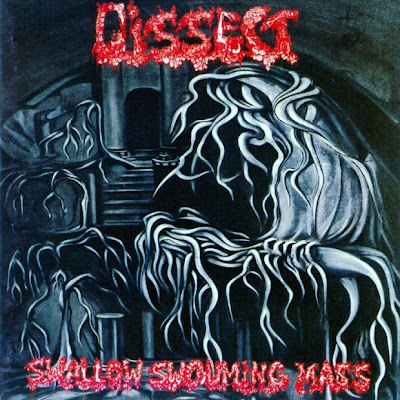 Dissect were yet another overlooked Dutch Death Metal band. After a couple of promising demos, Dissect signed to Cyber Music to release their debut (and what would be their only) album, Swallow Swouming Mass. For the record, there is no such word as "Swouming." Dissect were not innovators, or risk takers by any stretch of the imagination. The fare here is just no-frills, old school DM pummel, and that is exactly what makes this album a favorite for me. Swallow this.
Here
Posted by Aesop at 1:06 AM

Was totally gonna post this one soon, you beat me to the punch--which is totally fair, considering you introduced me to Dissect.

A pretty good album. What really caught my attention though was the art work. Fucking love the cover art. Being able to understand what he is saying within such a grunted delivery helps too. No where near as good as the Life Cycle EP. Soooo good. Thanks for both of these new finds.