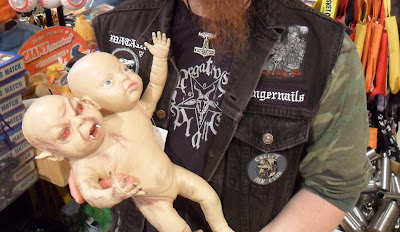 Lurker at the Threshold said...

so psyched for this one

"Excrement Exorcist" is the track title of the month, easily. Thanks, DD & AD!

Yeah! So glad you've made this a tradition, what a great way to start the day! Thank you both. Always a few things (at least) that make go, "What the fuck is that?" Cant's wait to listen. Happy Halloween.

Awesome! I wondering if you and Dread would keep up this mixtape experience. I still blast the 1dt two during the past two years. This will be a nice addition to the playlist.

not in agreement about Omen. "Last Rites" is a really good song though.

Any chance you can up this with the individual tracks/mp3's?

Super stoked on another awesome Halloween treat! Ignorantly passed up the Ultimate Spinach record numerous times, but "Ballad Of The Hip Death Goddess" was great! Thanks again!!!