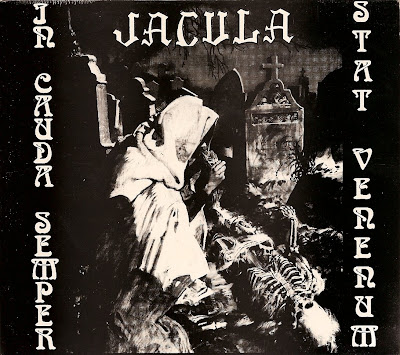 Occult ritual prog from where else but Italy. Jacula was the work of Milano Satanist compositare, Antonio Bartoccetti. Bartocetti enlisted Doris Norton (also known as Fiamma Dello Spirito), organist Charles Tiring and medium Franz Porthenzy to round out the coven. At times Jacula reminds me of Goblin, at other times it brings to mind the classic Hammer Horror films. The band's debut album In Cauda Semper Stat Venenum was released in 1969, a very witchy year. The group released one more album before Antonio started operating under the moniker of Antonius Rex. He was also briefly a member of the English occult rock band, Black Widow. In Cauda Semper Stat Venenum is the kind of album you play when you are alone and maybe doing something else (preferably something Satanic,) it doesn't command you to listen to it so much as it creates an atmosphere for you to exist within. Does that make any sense? This is cult before there was kult. Satan!
Here
Posted by Aesop at 1:44 AM

Wicked awesome album. I was going to buy this off of the rockadrome website but sadly they were out of stock =\ thanks for the upload

Fucking awesome! Can't wait to turn off the lights and listen to this one.

Cool Ive been looking for this one for awhile

I remember how for a while the Metal-Rules board was all agog about this on the grounds that it had "the first thrash riff ever"... stupid but I'll give it a shot...

yo Aesop,
it's devil dick from the devil's music/solace.

i started an old school demo blog. maybe a linky?

I just listened to this the other day. This is f'n great. I love organs.

awesome stuff - i am going to either mutilate a goat, bathe in it's bloodied entrails and violate my demon slut or throw a hot pocket in the microwave and play fetch with the cat. thanks for all the great music, and the variety of the stuff you present is especially delicious.

Thanks, Darryl. Why not mutilate a hot pocket and bathe in it's cheesy entrails....FOR SATAN!!!

This is one of my faves! Actually got it for 13 bux from Century Media some time ago. Usually goes for 20 most other places. Triumphatus Sad sounds like fukking Darkthrone!

a pattern has emerged:

stuff that was cult before there was kvlt

Roger, I love the notion of pre-kvlt cult.'60s/ '70s witchiness is perhaps one of my favorite things.

this is excellent. for the record you could have been a douche and said it was a recent release and i wouldn't have bothered looking into it and probably accepted that as fact... heh

you rule all the world with might and strength!

So I was born in a very witchy year? Nice! ;)
Last week I introduced Jacula/Antonius Rex to the Italians from Nanowar (of Steel) when they were at my place. Goblin they knew of course, but this they hadn't heard of...
Pre-kvlt cult... love that too!

You had me at 'occult ritual prog'. Cheers!

Wow! The 3rd song is totally like some obscure one-man B/M project!!!!Beherit meets bellbottoms! I love it this shit. Mike/okc

I think I might have to call bullshit on the '69 factor, there's definitely programmable drum machine all over this, which didn't exist then. And it sounds suspiciously like a Roland R5 or R8, mid/late 80's. However, no bullshit on the goth make out magnificence!
JoeP

Hmmm, Joe. You would know better than I, but I want to believe so bad. How can we get to the bottom of this?

Maybe George Lucas got his hands on this before re-release?
JP

the more i research this the more i think its fake. nothing even approaching that kind of guitar tone and those riffs existed until the 80s, and the only source of info about this album seems to be the band and the label that did the reissue. also fishy is that the cover art of this album the same as the second jacula album, just in black and white. if it is real its the most incredible musical anachronism i've ever encountered, but in reality its more likely to be the piltdown man of black metal.

I did a little research too - has anyone seen a copy of the original? Not the 90s repress (which I even doubt).

Aaahhh, this sounds like REAL Gothic, not this Pop-Shit like todays, especially in Germany. And if its some fake-one man band that pretends to be older than its probably is, then he did a good job.

that's not a drum machine. i'm pretty sure that's a tympani. through a special arrangement they only released 300 copies of this album originally, which antonius rex distributed to select brotherhoods and cults... this is definitely a band i'm trying to find out more about but the italian prog site has some cool info here: