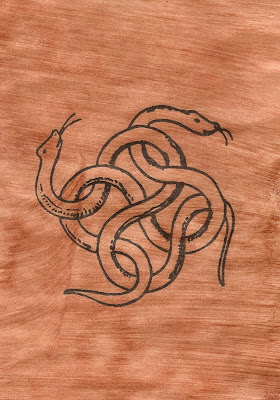 So here on the Hearse we've heard from quite a few one-man Black Metal bands, but one thing we haven't seen is a one-man Black Metal band. I mean like a real one-man band, a guy playing all the instruments at the same time! I remember seeing a guy once on Venice Beach who played bass with his feet while playing guitar and playing a snare on his back with sticks fastened to his elbows. The guy played mostly Michael Jackson songs. Anyways, here I am proud to present Pandiscordian Necrogenesis, the first true one-man Black Metal band. The man is Lord from San Francisco Black Metal kult, Horn of Dagoth. For this project Lord plays guitar and sings while playing a bass drum and a snare with pedals at his feet. Of course it is necro and fucked up and absolutely genius. This homemade CDR packaged in a DVD case slathered in real blood (which smells) was limited to a mere 88 copies (maybe dude likes Hitler?) and I assume they went fast after Aquarius Records raved about it's bizarre merits. I would love to see Pandiscordian Necrogenesis perform at the Cable Car turnaround to the astonishment of tourists, that would rule.
Here
Posted by Aesop at 12:55 AM

AQ raves for ages about everything they review

. . . Except that one slayer record

Damn! There's no limit to weirdness! And the songs are surprisingly good!

Tour with CAPTURED BY ROBOTS in the near future, yes? This shit just sounds weird...

omg, this is unbelievable! thanks a lot for this awesome release!

I felt like I smelled blood for half the day after reading and downloading this.I wonder who's blood it is.

Fuck. I can't thank you enough for these uploads.

Oh man. I have been looking for ways to keep up my addiction to totally fuck up black metal and I think I just hit the jackpot. Your blog is awesome. Consider yourself linked.

Picked this up at Amoeba in SF for the low price of 9.95... little did I know I was purchasing a fucking biohazardous item. Metal.

Yes, a Hasil Adkins post would be perfect right about now! May I also suggest the great Abner Jay?

This blog is the ultimate example of quantity > quality. Hipsters die

Don't like it? May I suggest you pedal your track bike on over to Lucid Media and download the latest post-rock or Wolves In The Throne Room album, douchetits.

A lot better than I thought it'd be. Thanks.

he should totally play at the cable car turn around.

I had the pleasure of witnessing this one man band live last night in NYC. It was truly impressive to watch him play drums and guitar at the same time. I picked up a cd to show my support, and if he comes to your town you should do the same.