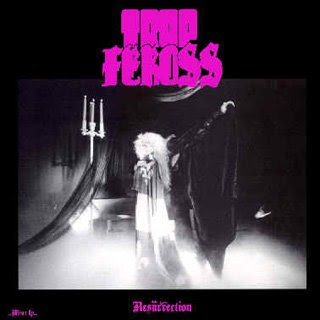 Trop Feross was formed when two Quebecois hard rock bands (Tropp and Feroce) merged into one. Trop Feross can best be described as the Canadien Death SS. Like their Italian counterpart, Trop Feross played horror metal with a distinctively grandiose pomp. The lyrics are sung in French by vampyric diva, Ginette Provost. Nothing overly mind blowing but the campy B movie atmosphere and bizarre vocals make this a keeper. Their only release was this 1984 EP.
Here
Posted by Aesop at 12:00 AM

Cool! Grew up with DSS, gotta check this out..

GOODNIGHT WHATEVER YOU ARE! said...

Hey man this is an amazing record, glad to see you dig this. The vocals on this one are out of control. There was a great interview with them in the last MORBID TALES zine.
http://www.morbidtales.ca/
Fucking Love Death SS also.

Wow. Never heard of these dudes before, you have introduced me to A New Thing. Thanks!