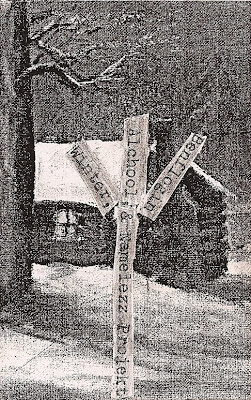 Here's some extremely raw and primitive improvisational Black Metal from Brazil's unfortunately named, Namelezz Projekt. This is the collaborative effort of Newton and J. who also operate in numerous lo-fi entities such as Hyperborean, Inmitten Des Waldes, Forest Poetry, Ecce Hommo, Valium and many others. Seems these two gentlemen act as the whole Black Metal scene in their town of Ponta Grossa. In 2005 alone Namelezz Projekt released six very fucked up demos, the last of them being titled Winter, Alcohol, Benflogin. This curious title seems to be the recipe for the Namelezz Projekt's clumsy approach to slapdash nekro hell. Some of you may remember Newton as the proprietor of the extremely awesome Gungnir label who released great stuff but many times failed to send it to you in a reasonable time frame. No hard feelings though, eventually it came and it was always worth the wait. This is still one of my most prized cassettes. Oh, and Benflogin is a Brazilian analgesic that if taken in large quantities can produce an LSD like effect, probably best not to mix it with alcohol, or winter .
Here
Posted by Aesop at 12:10 AM

Annie this is the best thing Ive heard since the last good thing which I cant remember..yes I can Prevail !!!

I'm not sure whether winter in Brazil is a particularly fearsome thing.

I guess Eboshidori really wants you to check out his work.

Namelezz Projekt, eh? Excessive. You should stay at my moms until the heat's wears off, nobody likes a rat, now you've dropped out the "name" they're going to be doing a 25-life stretch before you know it....not cool, Hearse, not cool.

I think "great" is stretching it a bit.

Aesop: Are you planning on posting that Eboshidori material that was offered in these comments? If not, and if you don't mind, I would really like to put it up at my Blog. IT seems like the "fans" of Funeral Stench might be able to get into it. If not, understandable.

Funeral Stench, you should, I have too much on my plate to right now.

This stuff is surprisingly amazing!

And by the way (don't consider this promotion) - Dunkelheit produktionen stocks some of their releases: http://www.dunkelheit-produktionen.de/shop/sites/redirect.php?lang=&searchstr=namelezz%20projekt

There are many nonsense people commenting around here. "Brown Nazies" ?
Brazil is not all made of black people.

And yes, some cities of Brazil can have a really hard winter.

I love when music is very sincere, and they made it very well.

lemos, sorry to bust your balls, but
I happen to know these guys and they ARE brown, just like the most part of brazilian people :)

but while we are at the topic, I'd like to stress that calling 'em nazi would be quite a stretch...