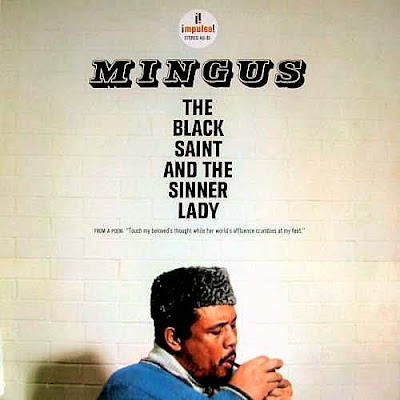 Charles Mingus was a great big man who was prone to violent outrages, a man who loved to fuck whores, and was never afraid to speak his mind no matter how cluttered with irrational thought bordering on the bizarre word salad of schizophrenic street tweaker. He was also one of the greatest composers, musical minds, and bass players of the last century, as well s an adamant political activist, so any transgressions or flaws in his personality are wholly irrelevant, especially when listening to, what I believe to be his most monumental work, Black Saint and the Sinner Lady. Now I have stated here before that I am by no means an expert on the extensive world of jazz, however I do have a few favorite recordings that work incredibly well on my dillettante's ear. If you yourself find yourself a bit jazz-ignorant but are wanting one album to occasionally sate a thirst or accompany a certain mood, may I recommend this particular record. Almost all of Mingus' work from the late '50s and early '60s is absolute unhinged genius, but Black Saint... in particular will appeal to anyone interested in evocative music. Over the course of the four compositions there is enough goosebump heavy moments peppered with plenty of "what the fuck" changes and grooves. It also stands as proof that jazz can be pummeling and menacing and not all noodly toodly incidental bop. With it's lurid, lurching horns, moaning bass and crisp understated drums, Black Saint and the Sinner Lady is the perfect accompaniment to a late night innercity stroll, or a peaceful rainy afternoon at home. Also, it should be noted that Mingus had his psychotherapist, Dr. Edmund Pollack provide the album's brilliant liner notes.Again, if you know it than I am sure it is one of your favorites, but if you don't you really should. Any feelings or preconcieved notions you have about jazz or Charles Mingus should be checked at the door like a pork pie hat, just settle into one of the greatest things ever.
Here
Posted by Aesop at 12:15 AM

absolutely adore this record. my old man turned me on to mingus when i was fourteen and hated everything (as opposed to now, being twenty six and still hating everything)... i used to prepare for junior high in the mornings with hatian fight song as loud as possible on my old hi-fi.

Will check this out, for sure. Otherwise I play a lot of the really early stuff from the 20ies like Jelly Roll Morton, Louis Armstrong and Duke Ellington. Morton is very highly recommended! What a pianist!

one of my favorite albums ever, good looks.

Great writeup. I grew up on this record and I wholeheartedly agree on every word.

I love Mingus, this is fantastic

I'm going to check this out, interested to learn what Jazz echoes out from the Hearse.

...also I forget was it Mingus or Monk that wrote a book on toilet training cats?

the first time in a looong time youve posted something i already own, cant complain, everyone needs this essential record, the way the speed builds faster and faster in the second track is a trick no rock band has ever matched,maybe my fave jazz album of all time,first heard it on a trip to Rome,always takesme back.

I really hope regular visitors to this here Hearse take the time to check out this jaw-droppingly brilliant record. I think you're absolutely right, too, that one doesn't need any expertise in jazz to recognize the astonishing creativity and sonic density of this work. This is one of those albums that essentially teaches one how to hear it as it unfolds.

Jam this and then throw on Coltrane's Ascension and prepare yourself for two hours of straight-up heavy music.

This album is one of my favorite sweaty, lurching messes. Thanks for reminding me to go back and listen to it.

My roommate listens to a lot of "noodly toodly incidental bop" and I always feel like my parents when I wander upstairs and ask "Can you tell the difference between any of this?" The same point can surely be made when I'm switching between Blasphemy and Conqueror records but something about anonymous jazz just makes me feel like I'm waiting for the dentist.

Thanks for posting this, though. I like some of the big names like Davis and Coleman, but for some reason I've never checked out any Mingus. Will rectify that shortly.

Aesop-
Thank you for this. I have always found jazz very difficult to approach- there is so much if it, it is so demanding, etc. When I feel like listen to jazz I always turn to the electric albums of Miles Davis ('70-'75) or mid 60's Sun Ra. Mingus is someone that I should hear, and I appreciate the hint about where to start.
On a related topic, does anyone have a good suggestion to start on the vast work of Rahsaan Roland Kirk? I'm going to check out 'The Inflated Tear' (allmusic's recomendation) but are there any others that one would suggest?

I just read his autobiography Beneath the Underdog and I highly recommend it if you can find a copy. It's funny and filthy and tragic.

Mingus doesn't have that much in common with the rest of the jazz sphere to my ears, which I think is why he appeals to so many people who don't listen to it otherwise. It really doesn't sound like anything else. My favorite is Pithecanthus Erectus.

jesus makes out with men, i know this because i made out with him.

thnx for this ace! its perfect!

One of my all-time favorite records. Been listening to this for 20 years. Glad you're turning people on to it.

Mingus was pure genius. He makes me proud of the SW

Cosmic never steers us wrong from FLA punk legends Maggot Sandwich to Charles Mingus what a shifting of gears and right on time. Certainly a real pancho and not a Sears one. Thanky

I'm no jazz expert, but I know what I like, and I like what the Hearse recommends.

Really glad to see this here. This, along with 'Mingus Ah Um' are my favorites by Charles.

Aesop, do you have any thoughts on Eric Dolphy's "Out to Lunch"? Check it out if you haven't.

Yes "Out To Lunch" is another favorite and in the wings for Hearse love.

Looking forward to hearing this. I've always thought The Clown was the reigning Mingus record. The older more musical brother of Fun House who thought about shit a lot more. Beneath the Undergrodg is fucking amazing as well. Anyone who hasn't read it....do so. Haven't read his wife's book but it's on the before I die list. Thank you as always.

awesome, this is amazing!

I'm gonna grab this one. Cheers!

YES. This is my all-time favorite record. Stranded on an island with only one album for the rest of my life? This is it. I get chills every time I listen to it. I can't tell you how many times I've listened to this record. My 9th grade science teacher played it while we were working on a lab experiment and changed my life forever.

You did it again, pops. This IS exactly what you said: a jazz record for folks that can't stand jazz. The mix is ass, though. no drums and no bass - and the bass guy wrote the music?? WTF. Actually they should mute the solos altogether, especially piano guy and his doo-du-lee-doo. But still, for jazz, this is pretty grim and drunk sounding and generally tolerable.Anyway thanks Aesop.

I've loved this record for a long time, man. When is Coleman gonna get some lovin' round here? Science Fiction is of the chain, man.

I read somewhere today that Charles Mingus invented a cat toilet training program which I guess I already knew but had forgotten about. I read that and put this on. One of my cats then shit on the floor. Great album regardless, and Mingus is brilliant.

The first time I heard this album, in 1999, I was 22, and I was in and out of sleep in the back of my parents' car as we drove to their house late one night from a family visit. It was dark, and I remember waking up and hearing just the very last section with it's eerie plunge-trumpets, trombone, and headstrong, steadily increasing tempo-- talk about goosebumps! I didn't catch the name, and I practically jumped into the front seat "Mom! What did he say that was?! What was it?!" "Mingus, umm, Black Saint, something..."
Bought it the next day. It was the music I had been waiting for all of my life, and it still is. Damn, I'm glad she caught that name.

Thanks for this one; I've been a fan of his work for some time, but never managed to pick this up. Thanks also for a great blog and for your own worthy musical contributions. . . Good luck on the road!

one of the greatest opening songs ever. really sets it for the rest of the album. easily top 5 favorite records.

Let My Children Hear Music is another must listen. He called it "the best album I have ever made." He totally toilet trained his cat and wrote a book that shows you how to do it. The Cat-alog. He was a pimp! Thanks!