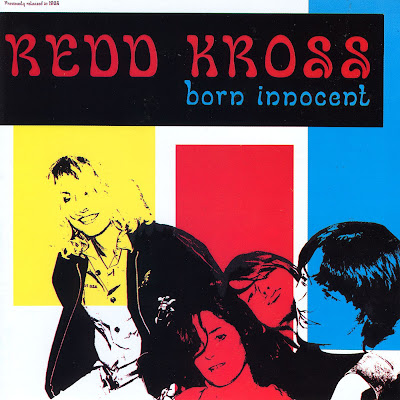 Born Innocent is the result of rich Hawthorne kids discovering the seedy punk rock of Hollywood and distilling it through their own love of pop culture and teenage snark. Redd Kross was started by the McDonald brothers as The Tourists and then Red Cross but changed the spelling to Redd Kross when the benevolent association of the same name took umbrage and threatened to unbenevolently sue the shit out of these kids. Originally the band featured Greg Hetson and Ron Reyes, but they left soon after to join the Circle Jerks and Black Flag respectively. Born Innocent brims with attitude, great songs, and enough references to the band's troubled anti-heroes to fill out a who's who of 70's and 80's icons, and hints at the full-on 70's retro concern the band would become with each subsequent release. I have pretty much loved everything Redd Kross since I myself was a snarky, pop culture-obssessed teenage punker, but Born Innocent remains my favorite.

Great album, but annoying cover. I like my punk rockers to at least pretend to be pissed off.

I'm so glad you posted this up! This album rules.

This is my favourite release of theirs too. Saw them about 20 years ago and they were awesome, but I just caught them again about a month ago and - honestly - they were even better. They played Born Innocent in its entirety, the posh boy ep and a few other songs. The whole band had tons of energy and enthusiasm, and the same wicked sense of humour that I remember. These guys are great.

Very pleased to see of your return! Cool band- wonderful raw clarity.
I like the cover. Its deceiving.
More like this!

Back when they were punk! I heard they have been playing the whole first album and the first 3 song single ,live in concert! pretty cool.Gotta love Red Cross!Oh Yeah! One of my besy friend's name is Jeff McDonald ,but I call him Fred (or Jeff McDonald ,not formerly of Redd Kross) a/k/a Phred ,due to his habit of spouting out ,"hoo hoo hoo" like Fred the Owl ,of Mr. Rogers neighborhood fame. Fred and I went on an ill-fated trip to see Redd Kross in Tampa Fl around the time of Third Eye. Stone Temple Pilots were the headliners ,who cares! On the way there ,we broke down near the ghetto ,and were stranded at a fleabag hotel ,where the wallpaper was actually millions of moving cockroaches!We hiked about 12 blocks to a 7-11 for microwave burritos and beer ,and in the morning our girlfriends drove up and picked us up.I had my car towed to somewhere in Tampa ,and had to drive back up a few days later to get my car. Never did get to see Redd Kross live,yet never blamed them for my troubles,either.They've always stoked my interest,tho' the last few albums were veering too close to commercial for me. "The Spirit Of 76" has fine scenes of Jeff and Steve,and their song,"1976" ,and of course the fabulous "Lovedolls" series of movies and soundtracks are faves of mine also.Sorry about going on so long here ,glad you're back home and blogging again! Thanks,Aesop!~

Love this LP & the cover! Glad your back!

A fine, fine record, as is "Neurotica" -- an all-time favorite of mine.