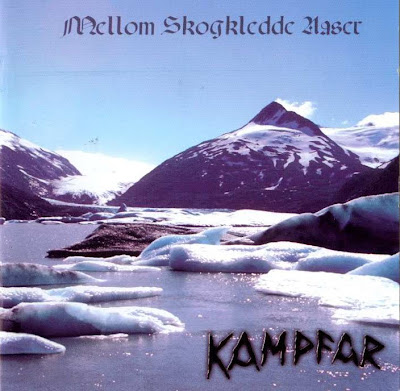 A great release from the time where most Norwegian Black Metal albums looked more like postcards than epic monuments to blasphemous evil. Released in 1997, Mellom Skogkledde Aaser was this young Norwegian band's second (and best) release. Despite the rather arctic looking clime portrayed on the cover, the title translates to "Between Wooded Hills." I imagine the band could have easily called this album "Valley." Kampfar's sound is more viking than Satan, reminding one of a less frenetic Enslaved. This isn't that childish flute fail of these new-fangled boring Napalm Records bands, this is well-executed 2nd wave Norwegian Black Metal.

Aesop, i have to say i love your sporadic classic album posts, even if i own and have heard the album a hundred times, i love the way you do it. Was total inspiration for my own blog. Keep up the good work.

I can't stop listening to this for some reason. Completely overlooked this in the 90s. Thanks for posting Aesop.

Kampfar is totally awesome. They're like the ac/dc of viking black metal