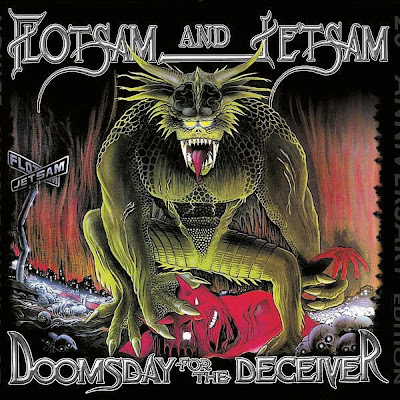 Doomsday for the Deceiver was Flotsam and Jetsam's debut and the only album to feature some guy named Jason who soon after became a millionaire with a terrible haircut. Flotsam and Jetsam were one of those bands that sat on the fence between Heavy Metal and the new Thrash, sometimes being referred to as "Speed Metal." Doomsday for the Deceiver is a plucky energetic album full of razor-sharp riffing and top notch performances from all involved, particularly the Jason kid. It is easy to understand why that rich band would want to snatch this kid up and totally mix him out of their albums. My only beef with Doomsday... is the songs seldom shift outside of the formula, plaguing a great album with a bit of sameness and lack of dynamics. But fuck if this band wasn't already at the top of their game on their first album, these dudes did their homework. This is a great for careening down a highway or ripping a drained pool on your stick. The pace is relentless. Protect your neck, son.

This is easily one of my top 3 albums for thrash as far as staying power. I had it when i was 9 years old and it's still not worn out (i'm 34 now). The lyrics are horrible at times, but those solos against that sugar sweet riffing and Erik's killer range! Too bad it was all downhill from here, though i'll put NPFD songs in a playlist sometimes with this.

since ya been back, you've been killing it with the posts!! I, for one, am appreciative! Thanks!
-Sean

yeah, this is top ten thrash for me...great post!

Hahahahahhahahahah...
("It is easy to understand why that rich band would want to snatch this kid up and totally mix him out of their albums.")

Thanks for this. Is this version the 2012 remastered version? Coz I read that the new remaster sounds different...

Around these here parts they are sometimes referred to as Float Me Some Jizzum...