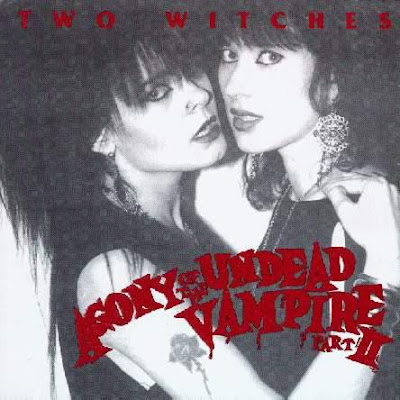 Easily the best Finnish Death Rock album you never heard. Bleak, yet full of pomp, melodic yet infused with an ennui that can only come from Finland. Strange that the band would title their debut Agony of the Undead Vampire part II, but that is hardly the oddest thing at work here. This dropped in 1991, which strikes me as a bit late for this type of thing, but goddamn if this doesn't scratch that maudlin Goth girl itch inside of me. Every song here is a delectable morsel of Scandinavian sullenness, with the peak being the lugubrious lurch of the track "Winter." If this doesn't resonate with you, you are most likely undead yourself.

Definitely need this right now. Glad you are back and blogging away. Thank you.

Given that the hearse is where i found Bleasure Grave, Mighty Sphincter and that godlike Cortex record, your deathrock recommends are gospel at this stage.
Great to have you back!

happen to have been revisiting my goth lately and needing more songs to drip around to. what an excellently odd album! thanks!

Thanks for turning this one on to us. Never can have enough Death Rock.