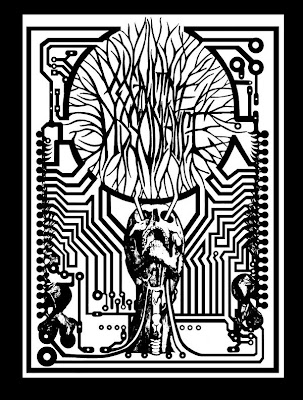 On a tour stop in St. Paul, Minnesota, I had the extreme noise pleasure of seeing and meeting Cognitive Dissonance, an excellent crusty grindy band from Minneapolis. They played with such ferocity and conviction that I was pretty sure that while I stood there agape, sipping my watered-down whisky cola, the system collapsed and oppression was abolished. Such wasn't the case, however, and when they finished I promptly used my remaining survivor vouchers to purchase this fantastic tape titled Omens of Doom. Now I know the twin cities is known for this kind of filthy, anarchy-politico monkeyshines, but I think Cognitive Dissonance are miles ahead of the pack. Check it.

Good to see you back. This is a great recording, thanks!

It's good to see you back, Aesop! I'm listening to this right now, and it sort of has a black metal feel to it.

ahhhhhhhh yes..i see what you did there and i love it!

so glad you're back. sad i may miss agalloch this summer but we shall see.