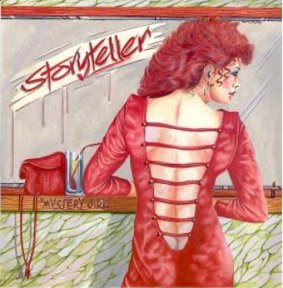 Storyteller, a rather low rent NWOBHM concern managed to eke out one awkward one single called Mystery Girl.  The A-side is a catchy but utterly inane song about a mysterious female that you see at a party and a nightclub, she dances, you see her, she disappears. Nobody knows her, she's a fucking mystery. For a band called Storyteller, they completely fail to spin any kind of tangible yarn with this song. The B-Side is a neon-beer sign scorcher called "Easy Living." Storyteller dropped this little bit of generica in 1985, a bit late in the game for the NWOBHM scene. No real mystery why Storyteller didn't rocket to superstardom.

i dunno, i like her hair and dress. i'm guessing she changed her name, got a haircut, and started an EBM band.

I can understand the fanatical NWOBHM collectors and such, but i never found much of interest outside the mainstays.