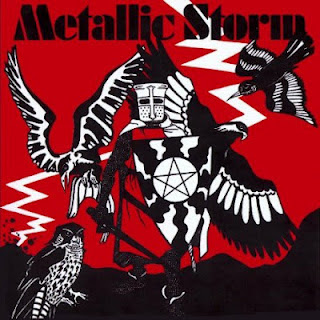 I think it's about time for another obscure compilation of spotty Heavy metal. Metallic Storm first dropped in 1982 courtesy of Ebony Records out of the UK. As far as I can tell, Ebony's sole output was a myriad of slapdash samplers of lesser known NWOBHM and Hard Rock, usually peppered with a few hidden gems, Metallic Storm, however, packs a lot of rough diamonds, and an early appearance by a young band from Denmark calling themselves Mercyful Fate. Following the King and his plucky pack of Danes comes the Econo-Judas Priest via Sunset Strip coke pablum from Tantrum, no thanks. Scimitar deliver an awesome charmer of a NWOBHM style tune called "That's The Way I Want It To Be." The unappealingly named Tarot Sutra contribute a clumsy 70's rocker that brings to mind images of wood -paneled dens, dirt weed and high school talent contests. Mean Machine are a hot mess of AC/DC-esque biker drool. I fucking love them. Confessor (not that one) are up next with an oddball keyboard and flange-slathered number that kind of comes off like W.A.S.P. meets The Stranglers. Jury show up in a glittery coke chariot of AOR schmaltz, but still not terrible. Wells Fargo (the band, not the bank) are pretty bad all around, but still better than Tantrum, they sound kind of drunk, I dig 'em. Mercinary are the blandest of the bunch, no real magic. Wykkyd Vikker are as corny as their name would indicate.  Pentapus kind of sound like the younger brothers of those dirtbags in Mean Machine with their very NWOBHMish bath tub amphetamine scooter bitch rock. Detroit border on some cummy booger sugar mean street meandering with a confusing number called "USA Light," but even this one is pretty enjoyable, sleazy, poorly recorded... what's not to like. Moby Dick aren't nearly as heavy or dicky as their name might indicate, but their peppy AOR inspired pop metal is pretty infectious. All in all, Metallic Storm is a ridiculously fun listen, with every band (with the exception of Tantrum) offering something of value in their material. Also it almost seems that every band (with the exception of Mercyful Fate) are drunk. Metallic Storm may be a great album to get absolutely blotto blackout with. I fucking love this record. I think you will too.

Ebony released some classic stuff namely Grim Reaper 'See You In Hell' and the blinding 'Loose 'N Lethal' by Savage, both worth checking out!

It's got Mercyful Fate on it and the pentagram on the knight's shield isn't even inverted. What the hell?

That might be the best album description you've written yet. Sadly, language has devolved to the point where most people don't even realize "cummy" is a word.