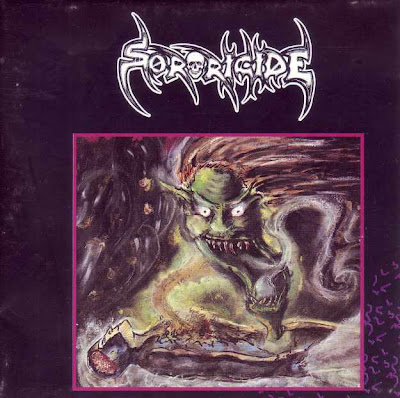 Sororicide was Iceland's best contribution to the worldwide Death Metal boom of the early '90s. Their one and only proper album, 1991's The Entity, is a lost classic of bloodsoaked teenage morbidity. The album was originally released in Iceland by Platonic Records and didn't really make it off that glacier. When the label folded, remaining copies were given to the band to be sold at their final gig in 2000. The Entity became a holy grail, of sorts, to collectors of obscure Death Metal, which resulted in a few copies turning up on eBay for ridiculous prices, as well as a few ill-concieved bootlegs. Another album that really should be reissued, perhaps by a certain big metal label that started out doing these sort of records, but has since aerially circumnavigated a certain aquatic predator. Seriously, I think the public needs this more than another Dying Fetus record. Just fuckin' sayin'.
Here
Posted by Aesop at 12:10 AM

You forgot to mention the bullshit town of Reykjavík :D (a town best known for crappy looking houses and drunk teenage assholes).
I'm from Iceland, and although I wasn't around at the time The Entity was released I hope I can shed some light on the situation regarding this album. The story goes that sometime after every Icelandic teenager substituted their posters of greasy haired, flannel clad, B.C. Rich wielding dickheads in favor of greasy haired, flannel clad, Fender wielding dickheads, Skífan (the Icelandic answer to Virgin, and the domestic distributor of the album) was left with a sizable excess stock of The Entity CD's. After desperately trying to get rid of it for a few years with meager results (even after demoting it to the discount bin where it was sold for the cheapest price possible), Skífan then decided the suitable solution was to have their employees demolish their entire left over stock. 1000 copies were released of the CD, and 1000 of the LP, so the LP is actually substantially less rare today.

To my knowledge the most notorious astronomical ebay offers have not been completed and are therefore not indicative of the real demand for the album. However, one of said offers actually resulted in prominent domestic mainstream media coverage of this album as "the most expensive album in Icelandic history". The resulting hype has led to many Icelandic people selling their copies of the album recently so there are a few more in circulation today than there were not so long ago.

This is indeed an excellent album and definitely deserves a high quality re-release by The Crypt, Nuclear War Now or similar. The band's subsequent material, although scarce, is a lot better though (a split and two compilation contributions) and was released as a MCD by the band last summer when they made a comeback and played some killer shows in Reykjavík. The band will most probably not continue under the Sororicide moniker, but some of the old members are currently working on some new material with a different lineup.

Hope someone bothered to read this.
Thanks for an awesome blog.
Cheers,
Thorir.

does Sororicide mean death to sororities? like frats and shit? thats so rad

On this day on which people SHOULD give thanks to the good things in their life that they too often take for granted, I give thanks (after my mother and my cat, of course) for this great blog, which has rescued so much kickass music from the ears of collector scum.
Have a great Thanksgiving, Aesop!
-the anonymous jew

I'm confused by the cover. If it's the killing (or sacrifice?) of sisters, then why does the person have a mannish looking jaw?

Interesting that Icelandic bargain bin fodder has become a high priced collectible. But it makes sense though as this album absolutely fucking slays! Still though, looking at the album cover art, I would have never guessed that this would be good for anything other than a laugh. Thanks for posting it.