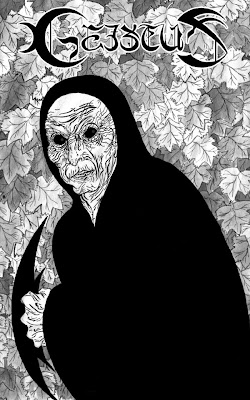 Geistus is the black metal alter-ego of Mike Scheidt of Eugene, Oregon doom legends, Yob. Mr. Scheidt obviously was moved by the works of Von, Blasphemy, Beherit and other such early kult luminaries, however Geistus has a bit more going for it in the skill department. This was released in very limited numbers by The Funeral Agency, which was the short-lived cassette only label that I used to do. Geistus has expanded to two members and has recently played some live engagements around Oregon. This tape kills.
Here
Posted by Aesop at 12:05 AM

This pretty much rules... thanks.

ooooohh! I like YOB and I love black metal, therefore....
thanks!
Great blogging you're doing here, by the way. Damned interesting stuff.

What were some of your other releases that you put out?

Angkor Vat-"A Pulse Beyond Nothing"

Lascowiec-"Gunshots Ring Out Over Vinland Streets"

Damn, you have been one busy bee. Thanks.

The ANgkor Vat and one of the Lascowiec demos were both posted on the Hearse. The others will eventually.

definitely post up some more of your funeral agency stuff, I'd be especially curious to hear the Varghokarghasmal tape, ive got their full length and they seem really out there.

This rips. I only had the tape, but no tape deck since I moved. Thanks A.

Whoa, I bought several Funeral Agency releases (Angkor Vat, Varghokarghasmal, both Lascowiecs) a few years ago, and I've been reading your blog for quite a while, so there's a pretty awesome synergy happening there! I'm glad to know of these releases that I missed out on.

Sweet! Thanks! Been wanting to hear this for a long time. I'm a huge YOB fan. I like this blog alot. I've grabbed a couple of things tonight. I'll try to catch up on commenting later. I need to get to sleep.

this shit makes you want to skate fucking fast. thank you!

got to see Geistus live once. and it was fucking insane. downloaded these mp3's a long time ago, but had to come back to say thanks.