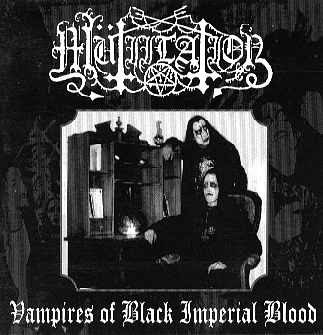 Mutiilation's Vampires Of Black Imperial Blood is essential Les Legions Noire material. Mutiilatiion has the distinction of being the only LLN band still active today, though rumor has it that they were ousted from LLN in 1996 due to mainman Meyhna'ch's heroin addiction. There are so many rumors surrounding these bands it'd be hard to confirm any such allegations and it bears little relevance to Mutiilation's fantastic recorded output.
Here
Posted by Aesop at 12:03 AM

I went back and grabbed up the other Black Legion stuff.

I've read a bunch of hype about this material lately. So, I'm gonna see what the deal is with these guys.

Somehow I missed the fact that you were posting this stuff in a serialized manner.
I really don't pay close enough attention.

great album, thanks aesop. and for all the other goodies you've posted up over the last however many months.

often wondered what's going on in the cover? wtf?

i look forward to these LLN posts everytime

This is dope......What are things like in Oakland in the aftermath of New Years. I read a story about some destruction, did it get real out of hand there?

Thanks for posting - been looking for this one for a long time.

Over and above the truly deranged sounds, this has to be one of the all-time classics of BM cover art - I don't know why it hasn't been given an 180 gm Vinyl reissue.

The cover is strange for being so mundane and also rare for an LLn band to put themselves on the cover. I believe the seated one is Meyna'ch and that is former bassist Mordred with him. Like vampires often do, they are seated at a desk prepared to do some of the tedious paperwork that goes into vampirism.

Classic, although my favorite LLN band will always remain Belketre. By the way, thanks for all the wonderful music posted on this blog, I just discovered it a few days ago and the hits keep on hitting.

Might have guessed that even ghouls would be bogged down in paperwork these days. Perhaps if they'd sold out a little they could have employed an admin worker?

i'm going to check this out just on the basis of your description.
-Chris

Great posts, how did they stuff pass me by? Particularly liked Torgeist and the Vlad Tepes/Belketre split. BTW the Moevot link is down, managed to find a couple of his other demos on other blogs - that's some scary shit!

if you notice the candle on the stand and how spaced out he looks then pay close attention.thats the spot where he shoots his dope.he is in the dopethrone and the candle is how he cooks his dope in a spoon.very fitting if you ask me for the cover being i know all about some heroin abuse.they are one of my favorite alltime bands,and many hailz to them...flesh

Just downloaded/realized Mutilation have a song called Rite of Darkness/long story short there's a fest going on here in Austin,March 6-7 with the same title...Nunslaughter/Midnight/Ashdautas/Volahn/etc.. are playing. I'm stoked! Some kid was sporting a Mutilation sweatshirt the other day at my job...thought that was cool,we started talkin' about the LLn and CosmicHearse(my encyclopedia for this shit and other shite as well).Gracias.