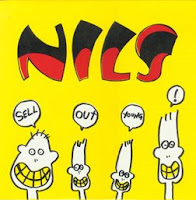 The Nils were a pop-punk band from Montreal, started in 1978 by the barely adolescent Soria brothers. Now before you get all hot under the collar, this isn't Fall Out Boy pop-punk, this is more like the power pop with punk leanings that rulers like Husker Du (Bob Mould was a huge fan of these guys) and The Replacements made notable. The Nils contributed songs to the BYO compilation Something to Believe In and the regional Quebec comp Primitive Air Raid before releasing the Sell Out Young 12" EP in 1985. Another EP, Paisley, followed in 1986 (anyone have this?), and a more slick-sounding self titled LP came in 1987. The band remained active well into the '90s, but for some reason yielded no recordings after the debut LP. The Sorias were top-notch songwriters even at an early age. This EP is the proof. These guys should've been better known.
Here
Posted by Aesop at 12:11 AM

Aesop, the Meat Joy LP is up on Phoenix Hairpins.
Best wishes and all that :)

Um... are you looking for the Lp too? You can find it here all the way at the bottom. I'm still searchin for Paisley, I'll let you know as soon as I find it. Seems there was a 29 song cd released that has evrything one would want and more.

Thanks this looks good. Lame as it sounds now the Doughboys' "Home Again" is really good.

thus far in my life the only pop-punk band I've ever taken a liken to are a more recent band on Robotic Empire called Pink Razors. Husker Du I've never really looked at through that lens and I know exactly zero about the Replacements but this EP is excellent. The supremely catchy songs sell it.

I didn't know that ALex had passed away, very sad.

that 29 song CD was released in 1996 by mag wheel records, and included the Paisley EP, the Now demo and some live. everything except their 1987 LP

e was in a band called chino right before his death. if you need a copy just leave a commit here and i'll post it. ... ohwellmonkey

Hey thanx for this, can't say i heard these guys before but if Bob Mould was a fan i'll give it a go.
Cheers and all the best for 2009!

Last fm says he Alex was hit by a train, not that he killed himself...

Oh fuck yeah!
This was a great album in my formative years.
Hadn't heard it in ages, stokes me again!

I would never have thought this band was/is still as popular as I am reading. They got a lot of airplay on Brave New Waves (Canadian National Public Radio's weekday midnight 'out there' show with Brent Bambry 80s-early 90s before he left and a frequent substitute took it over). Just read the whole obituary page for Alex. Kind of weird how halfway through the article it became as much about his brother and heroin, but those were probably some of the biggest things in Alex's life. So sad how the history went here and there, and then ended as it did.

This is cool.
--pop punk professor.

From the Montreal Mirror: http://www.montrealmirror.com/2005/030305/cover_music.html


In the first picture Alex has a "boom" sticker on his guitar.This was from the Winnipeg band the Dub Rifles, another great, underrated Canadian band. The drummer, Eloi later played in the Nils.

Fucking great band. I've been listening to the s/t LP for months now. Powerful songwriting and absurdly catchy melodies. The record to get, from my understanding, is Green Fields in Daylight, which compiles all the early demos and EPs and such. But yeah, kudos here, Aesop.

thnks for the post, the only thing i have heard of these guys is a tribute comp i have called "scratches & needles" been looking for the Nils and can never find

Wow this is great, not sure how I missed this. Too bad I wasn't exposed when I was 15/obsessed with Jawbreaker.

Check my Pointed Sticks post for something similar:
http://primitive-future.blogspot.com/search/label/The%20Pointed%20Sticks

Right on, Todd. Will do.

This is nice stuff. Thanks.

I have created a page on The Nils that is rather complete. I think everything you may want to know about The Nils is on there. I work in close collaboration with Carlos who is a great friend of mine. Here is the link to the page I created.

There is information on there on how to get Greenfields in Daylight from Itunes and also on Alex Soria post-mortem album called Next of Kin. If you need any information on The Nils and/or how to get any of their albums just send me an email at thenilsband@gmail.com.

Next of Kin is a very good album. People here have nicknamed it ''The Soundtrack'' because it feels like it's the soundtrack of Alex tragic life and death.

There is a very good article about Alex and The Nils that was made shortly after Alex died by The Mirror. Just click on the image of the cover page you will see find on the page I created.

Any comments or critics will be greatly appreciated...

PS: Alex was hit by a train cuz he threw himself in front of it. It wasn't an accident...