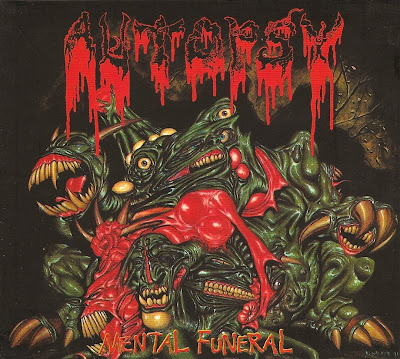 Lumbering and monstrous, Autopsy's second album Mental Funeral, was a fetid Shoggoth that crawled blind and crazy from the San Francisco Bay into my heart. Oily, sluggish, and thoroughly baked, Autopsy were like no other band before them or since. Word is that a new album will be released this year. I'm okay with that.
Here
Posted by Aesop at 12:03 AM

this album is so ferocious. first autopsy album i heard. sick shit.

HAPPY NEW YEAR
MAY THE GOD BLESS YOU FOR THE HAPPINESS AND SUCCESS YOU WISH
[CLICK BELLOW FOR THE CARD]
http://www.images.dgreetings.com/newimages/newyear/2005/new-year-floral1.jpg

I have read some of your posts. I would revisit, as I liked your writings.

Other Blog
LIFESTYLE AND REALATIONSHIP

for me, this is highest moment in death metal. scream bloody gore is a faint whimper in comparison..

Now that's what I call good news to start the year with.

This record always came off to me like a surround sound soundtrack to a sex crime, all throbbing purple uncircumcised priaprastic hardon dripping bloody pre-cum before the injection, all uncomfortable moans of discomfort and humiliation, no apologies, no tissues offered to wipe up the mess. I can still remember buying this tape and not quite understanding the cover art and putting it in the deck and not quite understanding the ugly sounds that came out, but I knew I loved the shit out of it. So very sexy. I'm rubbing myself through my pants just thinking of going upstairs and putting this disc on.

I understand that "sexy" and sexuality are subjective phenomenon, but fucking a through z, motherfuckers. I never got anything of the sort from this album.

I always felt that Autopsy's music had a profoundly disturbing sexuality to it--even before 'Shitfun' was released. The stop-start lumbering rhythms like an impatient bout of penetration, Reifert's grunts and whines didn't sound like he was trying to be scary like so many other death metal vocalists as much as he sounded in the throes of non-consensual libertinage, the 'shit on my dick or blood on my knife' posturing of reform school romance. Maybe it wasn't their intention, but to my abberant interpretations there's something distinctly De Sadean about Autopsy that I can't still get enough of.

quite probably my favourite death metal record of all time

i imagined aytopsy would be a band of people who fixate on just how fucked up all american redneck white trash people could be, in a b-movie kind of way. and no matter the years, i still think autopsy is fuckin great primitive, raw, fun to listen to while you re pissed, music.

Aesop…long time reader, first time contributor… awesome album, but even sweeter album art. It is now my desktop wall paper. And for the record, this album doesn’t drive me to do anything nonconsensual…only softly head bang. Thanks for the public service.

I'm gonna go with whoever said this tops Scream Bloody Gore. Definitely my favorite US death metal album. There's something so deceptively simplistic about the whole thing, but if you try and cover Autopsy you'll find there's like 15 parts to remember per song. I don't see how you could smoke as much weed as these guys did and keep it straight.

When Abscess played MDF a few years back Reifert was wearing a Nina Hagen shirt. What an awesome dude.

Autopsy and Impetigo are the highlights of american detah metal, hands down. I second S-bowlin in his vivid description. Great post!

I'm right on board with declaring this one of the finest slabs of US death metal eva! This album contains the exact sort of vibe I appreciate most in death metal. Rotten and evil to the core. A stout production, solid musicianship and great riffs all around but always that sense of decayed evil lurking through every song.

As for billias comment up above, I've always imagined Impetigo to be a much better choice for the ol' grimy rednecks grinding out a sludgy cacophony somewhere in the woods mental image.

i'm glad someone mentioned impetigo...their horror of the zombies is a masterpiece.

I just listened to Impetigo.

That band is totally ridiculous.

The 2 minute movie dialogue intros reminded me of Mortician or a power violence band.

This is one of the first things I downloaded from here, over a year ago, and it has been a perpetual favourite.

this album is like when youre scoring some shit,and you get to the house,and theres some rough lookin motherfuckers there....prison ass white boys,with that not sayin jack shit way of fucking with you,making the room way to unfuckingcomfortable.
you just wanna score your okie-coke meth and get the fuck outta there,but the chick whos house it is is fuckin takin her damn time,cuz fuckin randy aint ready to give you the fuckin gram yet,and worse fuckin russell and his boy whiskey,whos got a swazi on his hand and an SS on his forehead wanna keep fuckin with you,askin who you know and tryin to punk you by tellin you to give em a cigarette and shit.

the new album kicks ass. defenitly check it out