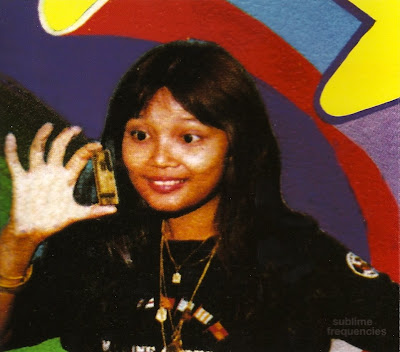 Another absolutely stunning Sublime Frequencies release. This time we are transported to Thailand's rocking past for some of the most infectious pop music ever committed to tape. For those of you who don't already know, Sublime Frequencies is a label run by members of The Sun City Girls. Over the last decade the label has released what they call "obscure sights and sounds from modern and traditional urban and rural frontiers." This includes folk and pop from Southeast Asia and the Middle East as well as field recordings, radio broadcasts, and ceremonial music from all over the globe. The label's releases are produced in limited quantities (usually 1,000 copies), and are generally not reprinted. Thai Pop Spectacular 1960s-1980s is among the label's best. If you don't fall in love with these simple, bubbly songs then you are too far gone. Dig yourself a hole and get in it.
ตรงนี้
Posted by Aesop at 12:08 AM

Yes, one of the best Sublime Freq. releases...have you heard the Group Inarane record? Aesop, while I'm here, just want to make sure you recieved the Hanatarash 7".... = Steve P.

Yes, the record arrived safely and you should be receiving a package shortly. Thank you very very much

That's a great comp! I first heard it at a tiki bar in North Oakland (used to be called King's X). There just happened to be a Thai woman on a date at the bar, and she was stoked at the compilation, playing various tracks and translating some of the lyrics for us.

Cool. I just watched Little Dieter Needs To Fly last night and I was gettin into the sounds. I mean the native songs sounded much nastier than what I am assuming these tunes are gonna be like, but none the less Im in the mood for South East Asian this week.

Thanks a lot for this. I need to pick this up stat.

"Kwuan Tai Duew Luk Puen (You Should Die By Bullets)" is one of the most obscenely catchy things I've ever heard. And will likely continue to, as I can't get its hook out of my skull.

Nice work as always, Aesop. Keep it up.

the Anon tracks from the Cambodian Sublime Frequencies release you posted some time back still elicits a chorus of "WTF is this?!" from anyone else in my car everytime it comes onto the ipod.

This sounds like a nice companion piece for those songs, thanks!

Anon just means anonymous in that case. Yes, this is almost as great as The Cambodian cassettes.

need any SFreq releases? i have most of them...the shadow music of thailand one is insane also

I think I have most of them Thanks.

dude, this one is really awesome. i know that's all i ever say but im a huge fan of your blog. spreading the word about those who spread the wealth.

thanks! i've got volume two, and right now, thai music from the 60's and 70's is the most exciting stuff i'm listening to.