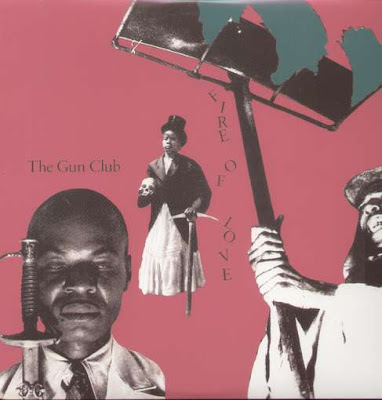 Fire of Love, the essential debut of one of my favorite bands, The Gun Club, was released in 1981 and was instantly a favorite of bespectacled rock critics and jaded punkers alike. I bought this album when I was an adolescent thinking it was punk. The Gun Club's name had been bandied about in those circles, and I expected something more akin to the Black Flag and The Circle Jerks I was enjoying at the time. Admittedly, it would be a few years and a few spins before I "got it." I have stated emphatically, drunkenly, with fists pounding on the bar that Jefferey Lee Pierce should be hailed as one of America's greatest songwriters.By now we all know how Pierce struggled in life, we know about the demons that rode his heels right to an early grave in 1996, and I am tired and don't want to write about it, but the darkness he carried permeates The Gun Club's work from stem to stern, and always makes me wonder if Pierce was brilliant because he suffered or if he suffered because he was brilliant. It hardly matters now, what does matter is the beautiful and poignant music and lyrics he left behind, and it still moves me. If you are unversed in this important, and oft-overlooked American icon, start here and work chronologically through The Gun Club's stellar discography. R.I.P. Jefferey.
Here
Posted by Aesop at 1:32 AM

phenomenal album. everyone should listen to this.

Great write up, one of my top 3 albums ever and the only album i can play note for note on guitar the whole way.
Also a big fan of his underrated Wildweed solo album.
And speaking of black flag someone please tell rollins to reprint the JLP autobiography, its 80 bucks on ebay last time i checked.

just listened to a track on youtube. have heard the name for years, but never checked them out. i guess i was expecting something more dark, brooding, and British, i think, like so many other post-punk bands i could never get into for lack of energy.

but this is great. thanks for posting this and the writeup!

don't fret if you missed the boat, the hearse will always be there to offer you a ride.

I rarely expect things from you that are not great, Mr. Cosmic Hearse!

Having had the opportunity to listen to this stuff when it cam out and see them live a few times in 82 or 83, i can tell you that i thought their music was great and that they were great live; and yes, the guy was absolutely "pretty darn near falling-down wasted"!

Life is beautiful and tragic, tragedy has its moments of beauty and tragedy can fuel some pretty brilliant art!

This is a classic.

Although not as polished or feisty as X this album holds ten times the danger. Gun Club made attacking unrelenting non-genre genre music. I love this album so much and find myself listening to it at least once a week.

i fucking love this album. though i already have it, i came in to say thanks for posting it so hopefully many others can discover it. holy shit i love this album so much, i am going to drink bourbon and listen to it tonight.

thanks for reminding me aesop, not that i forgot about it but your write up has inspired me.

Essential soul music for fire spirits! You're on a roll, mah man.

I'm willing to believe it's a brilliant album, but I'll own up to still not getting it. Tried it again the other day, and like a teenage Aesop I just can't get over the lack of thrashing power chords. "Sex Beat" rules, everything else leaves me cold.

For whatever reason, I actually dig "Miami" more.

I have always meant to check these cats out but somehow managed to never get around to it. Now seems as good a time as any. Cheers for bringing this to my attention.

been loving this, "sex beat" especially has great lyrics, tons of awesome memorable songs, thank you!