The Thing To Do 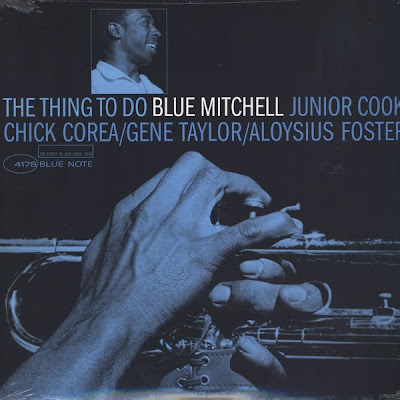 Blue Mitchell may have been one of the lesser known of the Blue Note scene, but the lithe trumpetizer laid down a couple of cool records for the label between 1963 and 1969. Mitchell was born and raised in Miami where he was discovered by Cannonball Adderly. His work with Adderly put him on the radar of some of the rising bandleaders at the time, and pretty soon he Blue had himself a regular gig with Horace Silver. When Silver's band fell apart Mitchell set out on his own. His first record for Blue Note was The Thing To Do, and like many of the great, second string Blue Note releases, it contains standard but highly skilled hard bop. Mitchell's band, containing Junior Cook, a very young Chick Corea, Gene Taylor, and total fucking badass Al Foster, are just top notch, tight, and ready for anything. The Thing To Do isn't a clunky drink smokey dive bar jazz date, it is more like a rainy afternoon in coffeehouse type of thing.
Here
Posted by Aesop at 12:22 AM

thanks for this. great player. I have "Collision in Black" LP.

I wasn't aware of Blue Mitchell yesterday and now I'm a fan, thanks Cosmic Hearse. Keep the jazz comin'.

You're a master at digging up under-appreciated blue notes. Thanks for another good one

Thanks -- definitely an underappreciated trumpeter.

speaking of Cannonball Adderly, how about posting Sewer Zombies "reach out and..."? I know you must have it...you must! and any links for it online are d-e-d....whattya say?