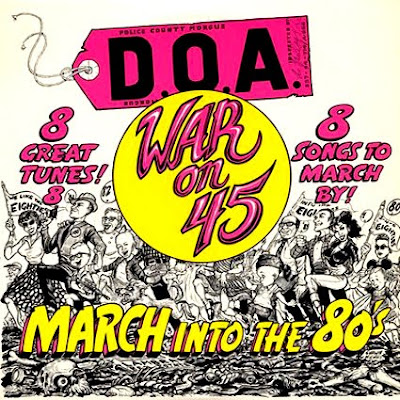 If you are old like I am, you remember those atrocious "Stars on 45" records that glutted shitty corporate radio in the early '80s. D.O.A., Vancouver B.C.'s greatest punk band ever certainly remembered, and in 1982 the band released an EP called War on 45. This stellar record collects eight songs, three of which have "war" in the title. War on 45 starts with "Liar For Hire" and it's trademark D.O.A. guitar intro. Lead dude Joey Shithead's instantly recognizable and most charismatic snarl rails against the untrustworthy and the false. "I'm Right, You're Wrong" is a classic D.O.A. singalong stomper. "America The Beautiful" might sound familiar to some, a live version was featured on the highly influential Rat Music For Rat People compilation. For Canadians, these dudes had quite a few songs about Reagan and the USA. After that searing political commentary, D.O.A. lighten up the mood with "Let's Fuck" a raunchy send up of the old Chris Montez tune "Let's Dance." D.O.A. return to the program with an excellent cover of the Edwin Starr classic "War." "I Hate You" is typically snarky D.O.A. "War In The East" is indicative of the type of goofy flirtations some punks had with Reggae (see The Clash, 7 Seconds...) it is wholly avoidable. This twenty minute conflict ends with a cover of The Dils best known number "Class War" and I almost hate to admit it, the D.O.A. version is better. D.O.A. in their prime were incredible musicians and really adept (for punk) song crafters. War On 45 only contains four real D.O.A. songs, three covers, and one bullshit bit of filler and still stands as one of the coolest punk records of the '80s. No other band could be this lazy AND this great. I love D.O.A.
WAR!
Posted by Aesop at 12:01 AM

I used to have a DOA tape and remembered digging it a lot. I'm sure you're right again. Selda is rockin in my kitchen for breakfast. Thanks homeboy.

Thanks for this. This might've been the first non-Ramones punk records that I liked (before I discovered crossover). Your mention of the "Stars on 45" song reminded me of this UK parody that charted in Dr. Demento's "Funny 5": http://youtu.be/QhSOupSU6es

My favourite piece of punk vinyl in my high school days. Still gets the adrenaline pumping. Sidenote,
"Liar For Hire" also appears in Hard Core Logo, which is where I first heard it.

The Beatles of Burnaby!