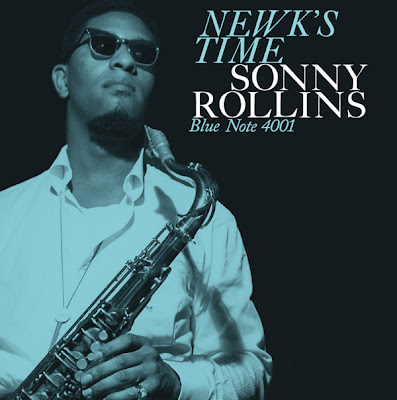 Sonny Rollins is harder than Henry Rollins. Sonny had a mohawk in '63. Sonny served time on Riker's Island. Sonny practiced for hours and hours on the Williamsburg bridge so as to not disturb his pregnant neighbor. Sonny did heroin and then said "Fuck that shit!" Sonny would drop out of music study yoga and come back with some crazy record. Sonny is in his eighties and still plays his horn heavier than My War side 2. Sonny dropped Newk's Time in 1957.
Here
Posted by Aesop at 12:00 AM

Increasingly, the hearse is my favorite jazz publication.

Great record. I saw Sonny a couple of years ago in Austin and he was spectacular. Still got it in his 80s.

BBC4 here in the UK had a evening of Sonny Rollins programming last night, fantastic stuff so a very timely post Aesop!

I first heard this album back in 2006. Great record! Missed a chance to see Sonny in New Orleans this last year. Pretty disappointed about that. A friend had offered me free tickets!
The Thelonius & Sonny record is still my favorite Sonny Rollins record though!

Some of your wisest remarks and I don't even like jazz.