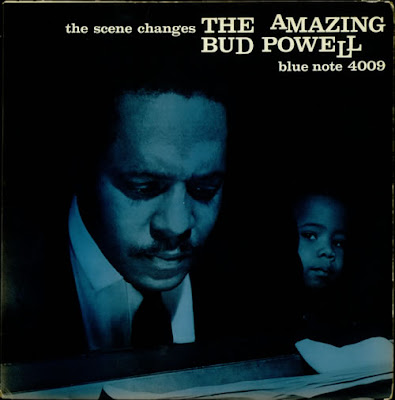 Damn. Great, heartfelt post. I'm not usually a jazz kind of guy, but I'm sold. Checking this out...

wonderful writeup for a forgotten genius.

Awesome write-up. I'm a fan of Bud's, and I knew certain elements of his life story - the cop-administered beating and subsequent slide into mental illness - but was fascinated to read these further details. Thank you for doing a relatively unsung hero of music justice with such a well-researched piece. This record is not in my collection... I'll be sure to look out for it next time I'm in a record store with a worthwhile jazz section. If that proves fruitless then maybe I'll come back here and grab it.

I've always enjoyed what Bud Powell recordings that I've heard, and knew he was a smoke-ass on the keys, but much of any of the rest of his story evaded me until now. Noted and absolutely appreciated. Thanks for the post, Aesop!

A beautiful essay. Thanks.

the ramblingmouthnoises in the back accompanying the piano... awesome.

This thing is killing me inside (a good thing). I love jazz and yet in my blind searching missed out on a direct exposure to Bud Powell. I am in awe. This is why music blogs like this must never die. You keep music alive for all of us. Thank you.

tremendous record, and a beautifully worded post. thanks aesop.

The relationship and reverence Monk had with Bud Powell for his contributions to the era are well chronicled in Robin Kelley's book on Monk..You have a gift for hitting the highs and lows of that relationship and even more history on Bud than Kelley without the additional 900 pages of backstory. I enjoyed reading this post.. keep swinging Aesop.

thanks for this....the prose and the recording....bud was the man...

I just wanted to say thanks for this article — I'm a huge jazz fan and this is one of the best bio pieces I've read in a long time. (I think the last one that touched me this much was a piece about Kaoru Abe.) Keep up the fantastic work.

Thank you so much for this post, Aesop. I was afraid your awesome write-up might be building it up too much but the music more than delivers. Great album cover as well.

oh man this album has me tonight. thanks so much.

Thanks so much man. You did Bud justice here...

Bud's skills were definitely diminished toward the end, but, especially in light of his troubles, his music was still very powerful.

This was a great post that helped me enjoy this album more than I would have otherwise. Thanks.