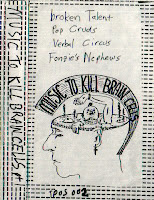 A Google search of the words "Pop Cruds" yields a scant 6 results, pretty obscure, eh? The Pop Cruds were an early Florida punk band that appeared on only 2 tape compilations released by TPOS records. TPOS records was the in-house label of the notorious band Broken Talent. The Pop Cruds was guitarist Marky Awesome's pre-Broken Talent band. Marky Awesome grew up and formed Harry Pussy, who gained some notoriety by being voted "Worst Band in America" by Spin magazine. This precipitated some serious ball washing by Thurston Moore of Sonic Youth who brought Harry Pussy on tour. The Pop Cruds played very lo-fi primitive punk rock with songs about sexy robots, peeping toms, nihilism, and a guy with a penchant for sitting on cats. The Pop Cruds made most of these recordings on an old 2-track recorder and I ripped this myself from a 23 year old tape so don't expect much, but the charm and spirit of the Pop Cruds shines through. If anyone has a copy of the "Music To Kill Braincells By" tape pictured here, please make me a copy or sell me yours. I'm dying to hear the Verbal Circus songs again. Pop Cruds here:

Actually, although yes, I was in Harry Pussy, Bill Orcutt and Adris Hoyos were the main instigators. I had nothing to do with the creation of it. I'm not taking the rap for them!

I was, however, in Pop Cruds with my cousin CJ and, and some other ne'r-do-wells called Robert Herbstman, Tim Kophley and Jim Hensley.

That Kophley character, by the way, was also in a proto-Harry Pussy outfit (just him and Bill) called "Milk Can"

All you seekers of obscure BS, suck on that! Good luck ever finding any cassetes of that particular abortion! (Just joking! It wasn't an abortion, but you won't find cassettes of it.)

Just wanted to set the record straight. But what about the Trash Monkeys and the Stun Guns?

Not, perhaps all on cassette but pretty punk rock, nonetheless!

Bushmeister, might you be Marky Awesome? I'm the Aesop that grew up in Hollywood (Broward County), was friends with Malcom, played in SLA, and once played drums for Broken Talent when Shane flaked on a warehouse gig with the Vatican Commandos. I was 14 and looked like Curious George, ring a bell? Send me a copy of "Coffee, Fuckin' and a Big 10-4" and I will marry you in Heaven and post that shit.

The "proto-Harry Pussy" guitar/drum duo Bushmeister refers to was named "Watt" (after a Beckett novel or the Minutemen's bassist, take your pick) not "Milk Can". For the record, the drummer's name is spelled Tim Koffley.

Where the hell did I get Milk Can from? I remember they had a song called "Real Seal" which had something to do with a label on a milk carton. Maybe, that's it.