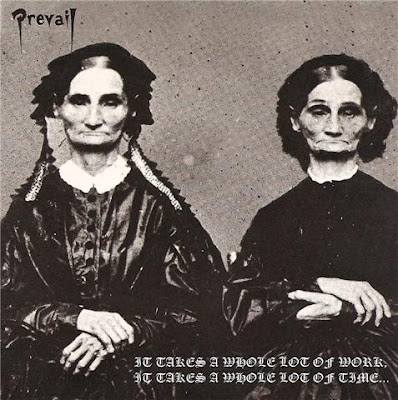 Before every sideways haircut kidlet at the mall got hip to Slaughter of the Soul and started a band with a really pretentious-sounding sentence name, there was a little group of high school buds from Martinez, California called Prevail. In the late '90s Prevail made some great demo tapes, played a few gigs at bars around weren't old enough to be in, and pretty soon they were drawing up to twelve or thirteen people at their shows. Shame really, these kids were way ahead of their time in looking to Sweden's past for inspiration. Prevail's farewell came in the form of this CD, oddly titled It Takes a Whole Lot Of Work, It Takes a Whole Lot of Time. As I mentioned before Prevail were sonically reminiscent of At The Gates and Dissection while looking more like the guys from your geometry class. A fantastic band that should be heard.
Here
Posted by Aesop at 12:01 AM

Holy crap! I remember getting this CD when I was working at Dark Horizon records. They were shopping it to the label and I wrote them an e-mail telling them that although I thought the music was good, the cover art was not very representative of the types of music the label put out. Kind of a dick move, but that was the mindset I was in. Wow, I never thought I would see this band again.

The cover art is lazy at best, but what a great band they were.

Ah, Ross, this is what it takes to get you to comment here? I was going to mention the LaBarre/Impaled connection but I wasn't sure if he played on this Prevail release even though he is credited for the bulk of the songwriting. I never really got the Altar the Sky album, but maybe I need to give it another go. Lend it to me.

thank you for this

Right from the first track, I was blown away.

Thought this was going to be about the hardcore band from SC.

this is great. thank you.

This is great. Thank you.

Don't judge an album by its cover. Love the guitars on this one and Swedish DM sounding vocals.

I didn't judge the music. I thought it was quality Gothenberg worship. Listening to it again now, I can still say it is good metal, and was ahead of the curve of the onslaught of metalcore mediocrity that swept the U.S. soon after this was dropped. I personally was just looking for more aesthetically consistent art ideas when demos came through. That was just me though. Its not like Dark Horizon had released albums with mind blowing artwork!

Finally got around to checking this out, and holy shit.

You wouldn't believe how many times I've listened to this in the last year. Holy Shit!, indeed. Thanks!!