Hickey's Last Night On The Planet 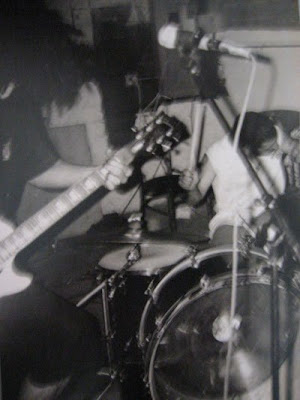 Big thanks to Mark Beef from Arizona for rescuing this from the vaults. This recording was Hickey's very last appearance as a band. Actually we broke up the night before at some god awful bar in Tucson Arizona, but reunited the next day to play live on KXCI. I guess the DJ hadn't really cleared it with the station directors and they were kind of pissed about the whole thing. We didn't help matters by prattling on about "pussy frat boys" and getting naked. Not the tightest performance or the greatest audio, but historic for the simple fact that it was the night that the band you wished would die actually did.
The Songs
1. Hickey Blvd.
2. The Boy Who Cried Werewolf
3. Sean's Mohawk
4. California Redemption
5. The Prettiest Junkie In Town
6. Her Prosthetic Hands
7. Underneath The Stupid Sun
8. Everything I know About Sex I Learned From KISS
9. Hickey Is About Long Hair And Getting High
10. The Export of Coffee Beans From Chiapas Mexico...
11. The Kittens Will Have Their Say
The Rock!
Posted by Aesop at 12:00 AM

having trouble extracting this one. Is it just me?

Just tried it and worked fine.

The one band I have to thank for introducing me to Matty and Hickey is Your Mother. Seeing them at their sickest at a shitty hotel in Australia was a godsend. Finding a copy of their one CD 'One Big Inside Joke' with their cover of Stickfish introduced me to the Fuckboyz and the rest just followed on from there.

Thank you so much for sharing this.

Stoked to give this a listen after school!!

I appreciate statement-of-purpose-songs that really get the message out
Sex Pistols had "Anarchy in the U.K."
N.W.A. had "Straight Out of Compton"
seems like every powerviolence band had at least one song with a declarative statement about their name
"Charles Bronson" by Charles Bronson just came to mind
"Hey, Hey, We're The Monkees" by The Monkees

how totally random that Mark Beef and copius amounts of amphetamine came up in conversation just last week...and now this! it's funny that you came home fron that your and didn't really tell anyone you broke up, you just stopped.

holy eff! thanks so much.

huh.. zip downloaded fine. it unzipped fine, but for some reason won't show up in a new folder or in itunes. driving me cuh-raaaazy.

awesome. so glad to have this again.

What everyone else said, plus this:


I went to high school about an hour south of Tucson. My best friend lived in Tombstone.

I was long gone by the time you guys toured through this part of the world, but he loves the fact that he found a Hickey heart and something about the Muthaship breaking down at a gas station pay phone in Benson or
Whetstone or somewhere along I-10.

Thanks for posting this. Can't get enough of it.

We left our first van (we had 3) in Benson, it was called The Mothership. We were on our way to Tucson.

I'm having trouble with the file as well. I can download it, but when it comes to unzipping it, it borks.

Currently listening to Various States as a hopefully temporary fix.

Really excited about this. Also having troubles extracting it though. Saying it's corrupt.

I just tried it AGAIN and it worked fine. If anyone has a suggestion for an alternate way to zip, upload, or whatever to make it available...

Hickey! Hell yeah, as Aaron Probe stated in his interview with you, you were the ultimate low maintenence and diy band.

Also with sarcastic and sleazy lyrics!

That's what people from the Book Your Own Fucking Life days aspired for!

It's free and should fix any problems you're having extracting the file.

Not at all, Sephim. I appreciate it.

I tried the object fix zip but still having problems downloading, oh well. Maybe ill have to call call the geek squad.

Okay, Object Fix seems to be a piece of crap - BUT if you are using WinRAR to extract your archive files, there IS a fix at the following page (Step 6) -

Managed to open up the file and the mp3 works fine.

aesop,
thanks for all of the hickey rarities and downloads, now i don't have to play my already beat to shit records to get my fix of the naked cult!

so thank you to sephim as well

Awesome upload. I've lived in Arizona my whole life and never knew about this band. Very good stuff and I'm not having a problem with the zip file but I always extract with WinRAR if that makes any difference.

This band was from San Francisco.