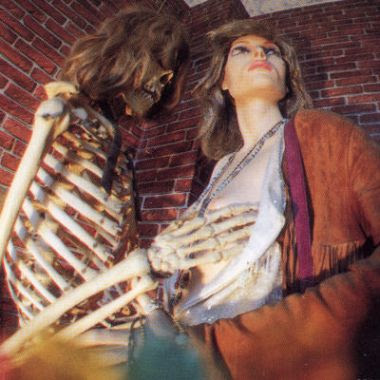 That cover has your curiosity piqued, does it not? Tentacle were a little known psych/hard rock band from Scotland that managed to eke out one album in their day, Angel of Death released in 1971. Angel of Death is a morose and dynamic album with epic, sprawling songs. Just as you start to grow a bit weary of the hippie ren-faire vibe, Tentacle has a way of lurching into some choice blotter riffage to remind you why Angel of Death merited such a fucked up album cover.
Here
Posted by Aesop at 12:15 AM

Hey Holmes
Say your picture in Decibal yesterday.. Nice one!
Thanks for the goodness
from Dallas TEXAS

This is one of my secret albums I like to fuck people's heads with. Like, "Oh, yeah, T2 are good... yeah, the early 70s Iron Maiden's alright. Have you heard... TENTACLE?"

Better than T2 as a whole, maybe... but better than "No More White Horses?" Hmmmm...

That album cover is out of control amazing though!

Thanks! Glad to get to hear this!

Love this kind of stuff...ever heard Night Sun "Mourning"? Thanks

Cover could be a JANDEK cover ca. "The Place"(!) Thanks for this man, I love it!