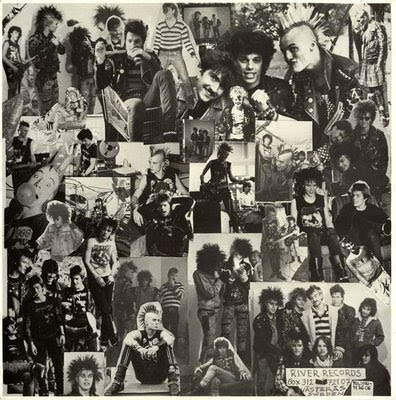 I don't know about you, but when I see one of those classic "bros hanging out" collages on an old punk or metal album I get a certain kind of giddy feeling that I am in for a party of record. T.S.T.'s self-titled album from 1982 is no exception. It is a party, a Swedish punk party of unparalleled fun. The opening track "Sweden" sets the mood with it's clumsy, liquored-up Bo Diddley beat. But in case you are some kind of tight-assed wallflower, T.S.T. follows up with a raucous sing-a-long cover of "Teenager In Love." Now if by then you aren't on board, the band rips through six more tunes of slovenly, infectuous, drunken punk fucking rock, with three of the tracks taken from a live show. I have no idea what T.S.T. stands for.
Here
Posted by Aesop at 12:03 AM

Great! Remember them being shittalked by various more "famous" bands (Asta Kask..)back then in zines etc. for not being all out PC, but fuck that, this stuff is perfect to get wasted too by your drug of choice.
There´s a Discography 1979-85(bootleg?)here to check out for those into shit lika this: http://www.mediafire.com/?4mc4zenmnn2 Haven´t checked the quality yet... Oh and T.S.T. stands for "The Shock Treatment"....

T.S.T stands for "The Shock Treatment" according to a swedish punk site:
http://www.punktipset.se/band.asp?id=429

woah, classic stuff! this is really great. TST stands for The Shock Treatment (think it's from a ramones song?) and
back here this record goes under the name "sweden-tolvan" :)

Holy shit, this is going on tonight's party mix. So rad.

thanks for the find!

Speaking of Asta Kask any chance of getting some of that stuff on here Aesop?

Ryan - just go to your title bar and type in Asta Kask, their home page will load right up and you can find plenty of mp3s there.