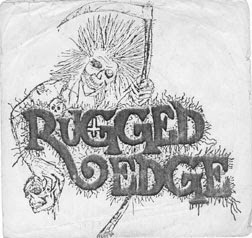 Rugged Edge were a punk band from Miami in the '80s. The had big mohawks and favored the UK style of punk. I use to see them a lot at the Cameo Theater. People would slam, and sometimes skinheads would beat somebody up while their girlfriends held their jackets. Here's Rugged Edge's 7". I can't recall what year this came out, but if I had to guess I'd say 1986. Strange record with side a being a bit more artful than the neanderthal punk on side b.
Here
Posted by Aesop at 12:00 AM

The part about the skins rings familiar. Funny in hindsight, but still lingering sadness. I just told my dad last week about a stabbing that I saw one skin inflict on his own brother in Woodbridge, VA, about 1987.

Cool logo, I will give them that.

Just found out the singer of this band passed away a few months ago.

LOL Alex Cuevas isn't dead. He's sitting on the couch playing the ps3 right next to me.