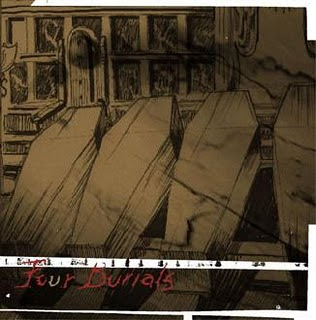 Some of the most crippling doom acts of recent joined forces in 2008 for a four-way pout off called Four Burials. The funeral procession begins with Otesanek from Philadelphia. Their contribution, "Seven Are They," plods like a hulking, lumbering pachydoom, but unfortunately it gets a bit tiring. Loss follow up with a gorgeous track called "Death March Toward My Ruin." Loss is a band who have never let me down, this one is no exception, just devastating. Spain's Orthodox is another band whose body of work has captivated me. Their druggy hypnotic "Heritage" stretches over eighteen minutes of delicate Krautrock doom. The whole service comes to a despondent close with the Australian band Mournful Congregation and their song "Left Unspoken" a cavernous lament that towers and then sinks into drunken despair. Four Burials is a massive testimonial from some of the finest and most heartfelt doom bands of the last five years. So highly recommended it isn't even funny.
Here
Posted by Aesop at 12:35 AM

One if the best splits ive heard. Crushes like no other

Sounds good. On a doom binge at the moment. Check out a local band to me: http://www.gallowgod.co.uk/home.html
They play trad doom the slow 'n heavy way

Love Orthodox. Thank you so much.

Every Hearse reader ought to hear this.

Ah, a fine bonecrusher. Pity about the Otesanek track- they fucking kill it on their split with Coffins. To the extent that I've NEVER listened to the Coffins tracks!