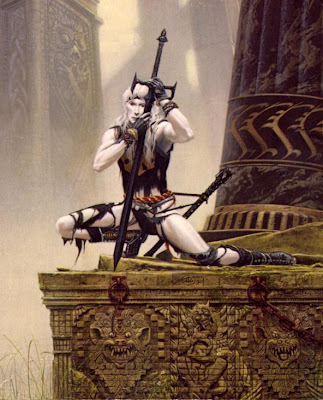 First off, this extremely rare demo has no cover so I arbitrarily chose a picture of Michael Moorcock's dour albino and the sword that ruled him, Stormbringer. Stormbringer, the band, hailed from the bullshit town of Karlshamn, a town best known for, well, nothing really. The band only released three demos in their short run, this one being the last. The material is doom influenced Swedish Heavy Metal but the ringer here is singer guy, Christian Nelson, who sounds like he has polished off a bit of Explorer in the studio. After the demise of Stormbringer the more tenacious members launched a new band called Faith, who were featured on this blog before. If you've come to love these Svenne Henne's teeth jewels of bygone Scandi-metal then I suggest you snatch this one up .
Here
Posted by Aesop at 12:03 AM

Enough with 'bullshit town'. People live there and everywhere. Things happen there.

Helm, it's a joke, it's funny because it is recurring. Lighten up.

Thanks, Aesop. I never got a chance to check out this demo, but I love the first two from Faith. Hopefully this one is on par.

I have also decided to morph a suitably absurd Elric photo because, really, no album should be coverless. And I'd say there really aren't enough albums outside of the Edgar Winter realm that feature albinos in action. Hail, Cirith Ungol!

Some dick from a bullshit town in the midwest.

This is some tits cover art! That dude is exactly what I think of when I think of Scandinavian: someone so white that he's almost transparent.

Another example of bullshit things being funny by recurring are Helm's posts.

Nice artwork or it might be the wine and grandaddy green I'll have to download and find out.

being funny is serious business huh!