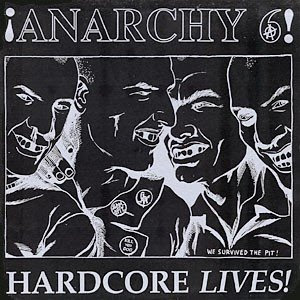 Basically, Anarchy 6 was Redd Kross doing a parody of generic hardcore with all the trappings and stereotypes in tact. There are songs about society, skating, slam dancing, and killing dogs. Funny samples poking fun at Decline of Western Civilization, a cover by Raymond Pettibon, and even a picture of the band in full Suicidal Tendencies garb pushing a hippy into a garbage can. It's amazing they never got their asses kicked for doing this, maybe they did, I don't know. The band was formed to appear in punk director Dave Markey's sequel to Desperate Teenage Lovedolls which was titled Lovedoll Superstar. Weirdest thing is, Hardcore Lives! is a pretty good record. Here
Posted by Aesop at 12:17 AM

Maybe I'm fucking up, but the link is taking me to the Sea Shanties file (which has quickly become one of my favorite guitar records).

My mistake, I'm going to fix that now.

No, it's a lo-budge camp film with some L.A. punkers of note "acting."