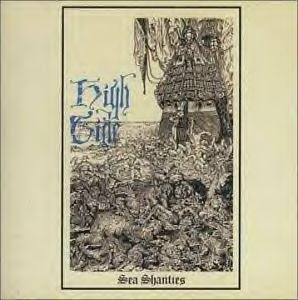 Here's another one you may have missed if you were born too late, Hight Tide's 1969 outing, Sea Shanties. It is a colossus of psych/prog genius from the UK that must be heard to be believed. From the opening chords of Futilist's Lament you know that you are in for some towering heaviness ahead of its time. Like the aforementioned Phantom, the vocals are reminiscent of Jim Morrison and The Doors, a band I never could get behind. High Tide was a trio, but for this album (their second), the group enlisted the talents of violinist Simon House, who went on to play with Hawkwind. Also worthy of mention is guitarist, Tony Hill, for without his unique style, screaming wah-wah solos, and bizarre arrangements, Sea Shanties would be just another anonymous platter of passable hard psych. Here
Posted by Aesop at 12:36 AM

I actually found this very album at a garage sale...didnt know anything about it, but bought just because of the cover art. picked it up for $1...great early, heavy psych record. great record to have on vinyl!

YES! man this is one of the best late 60s pysch albums I've ever heard. Saw it years ago for cheap on LP and I liked the cover art so I grabbed it on a whim, proved to be a very worthwhile expenditure of $5!

Damn, you guys lucked out. I think I paid over $20 for my shrunken digitized plastic cd version. Ever try rolling a joint on a cd? Not very cool.

well the cover art alone turns one into a drooling music collector nerd ! another goodie from the cosmic hearse

i downloaded this from a friend recently along with precious cargo and the flood. really sweet stuff.