The Brother From Another World 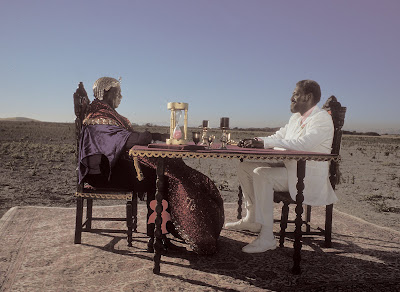 Space Is The Place is the 1974 film starring avant garde jazz composer, Sun Ra, and features some of his best music. It is easily the best sci-fi blaxploitation free jazz movie ever made, and is a great place for anyone who is interested in Sun Ra, but found the sheer volume of his work daunting. The plot is as follows: Sun Ra discovers a new planet with his crew "The Arkestra" and decides to settle African Americans there. He travels back in time to the 1940s. There he encounters an omnipotent pimp tyrant called The Overseer and in a sequence reminiscent of Ingmar Bergman's The Seventh Seal, they agree that a card game will determine the fate of the Black race. Sun Ra returns to present day (1974) Oakland in order to recruit young Black people to colonize his new planet. Over the course of the film Ra battles many enemies of Black culture and eventually goes head to head against the Overseer himself. Sun Ra, along with screenwriter, Joshua Smith and director John Coney seem to be making a number of statements about race, the state of Black entertainment, and a myriad of social issues, but at times this gets to be as confusing and meandering as Sun Ra himself. Nonetheless Space Is The Place is a fantastically cool film with some incredible music. I highly recommend you see it. The soundtrack is available here
Posted by Aesop at 12:10 AM

Aesop,check the Sham 69 post on my blog for what you were looking for.
Have a great day!

They will be playing this at the Alamo Drafthouse in Austin a couple weeks. I was planning on seeing it anyway, but your description makes me even more excited.

I keep wanting to rent this and it keeps getting pushed back... some day.

I have a record where Sun Ra plays a squeaky door solo for 10 minutes! And it's awesome!

I luv this shit. And as an authentic punk douchebag it was Antiseen (of all bands, ha ha) that got me into Sun Ra! beat that!

Antiseen, or rather, Jeff Clayton, turned me on to Kiwi flavored Mad Dog.