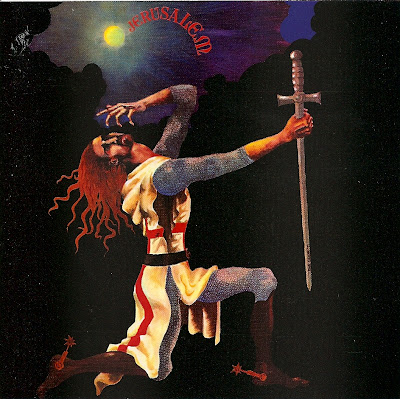 Jerusalem were a young hard rocking band from the UK that caught the attention of a one Ian Gillan, who agreed to help produce what would be their only album. What exactly was Ian Gillan's role in this amazing album? Well, he did own the studio where it was recorded, and he did pen the liner notes. The production is pretty raw and particularly heavy for the time (1972). The songs are fantastic even if the playing isn't always perfect, but as Mr. Gillan states in the liner notes, "As they are young and a bit green, they don't follow many rules, so their material is almost crude-but still immensely powerful in content." This statement implores the reader to consider the age and experience of the band before passing down any harsh criticisms. I think it's unecessary, Jerusalem were great despite their age or lack of experience. He goes on, "I believe that, whenever possible, the work of writers and players in their formative stages should be recorded before inhibition and self consciousness set in, before fire and aggression die down, and while they are still absorbing influences and doing things which others might consider uncool. Most important though, before the develop that self-imposed rigidity which afflicts so many. I hope none of these things happen to Jerusalem, we'll have to wait and see, this album is just in case. I hope you like it as much as I do." Well, Mr. Gillan, I do. Here
Posted by Aesop at 12:06 AM

I like Jerusalem a lot. (I have the Japanese edition on cd). It sounds like early NWOBHM, years ahead of its time, considering the year it was released ...

can´t argue with mr gillan , can you ? harry lime

Fantastic record. When you upload the album all the track names are one off. For example I fell in love with the song "When the Wolf Sits" when I did some research I found out the song was called "Midnight Steamer", great song, terrible name!

I know. The track list is wrong on the CD. Sorry about that.