Zoe Is Apparently Japanese For "Amebix" 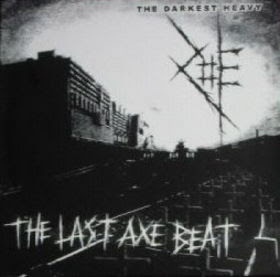 It's odd, while tribute albums often disinterest me, I am always a sucker for slavish worship and plagiarism of older bands, especially when the older band is one as great as Amebix. It would seem that the Japanese have mastered this sort of unabashed ripping off of original bands. Ever wish the Bad Brains were Japanese? Well lucky for you there's Fearless Vampire Killers. Wonder what Axegrinder might have been like if they were Japanese and not English? Well check out Effigy. Even media darlings Boris started off as a near carbon copy of their heroes The Melvins. So in homage to eastern homages, I present Zoe's crushing The Last Axe Beat. The album contains many great riffs that Amebix themselves never got around to writing and more than a few that they did. Should this kind of blatant mimicry be celebrated? Sure, why not? There are worse bands to emulate than Amebix, and this isn't as ridiculous as the whole Dis-band weirdenss, at least not yet anyways. Besides The Last Axe Beat is a great listen.
Here
Oh, and if you dig this, I just noticed that the great Only In It For The Music Blog has posted Zoe's The Beginning ep.
Posted by Aesop at 12:02 AM

Yeah, I was a little weirded out by that deja vu feeling when I first got this LP... but, like you said, it sounds so damn good!

Yeah, what I want to know is how Amebix themselves feel about it. I mean, check out "Slaughter" it's really just the chorus of "Axeman" stretched out to be it's own song.

I can't say for sure, but "The Baron" seemed to really like the tribute LP on which Zoe appeared.

Wow, cool. Thanks for sharing that. I was in a band that Spider was in, but it we both play drums so it was at different times, but the other guys spoke very highly of him. Rumor has it they were/are great folks. Reading that sort of confirms that notion.

Hey Aesop - what band were you in that Spider was in?
John/Milwaukee