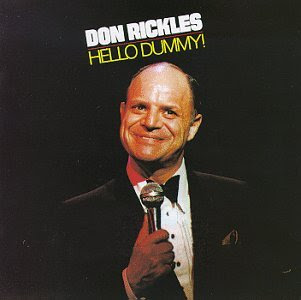 It's 1968 at The Sahara Hotel in Las Vegas, the martinis are flowing, and you're on a winning streak, that is until Don Rickles takes the stage. Comedy albums are strange. I mean, how many times are you going to listen to the same jokes? Well the exception just might be Don Rickles' Hello Dummy!, perhaps because it is not funny, it's creepy, therefore transcending comedy altogether. You could almost say that Rickles invented a new genre called anti-comedy. Vicious and unrelenting, Rickles is like a gatling gun spewing forth a barrage of racist epithets, most of which don't even make much sense. Hello Dummy! is tense and uncomfortable, and even more so if you consider the state of racial relations in the U.S. at the time, but Don doesn't give a fuck for tonight this little gin-fueled hate jew rules the strip.
Here
Posted by Aesop at 12:11 AM

huh, one of my favorite comedians has rickles as his heroes and he does like to "bust balls" with his friends occasionally.

right-fuckin-on Aesop, never know what your bgoing to be puttin up here on 'the hearse and this little gem is just what i love about your blog.

RICKLES RULES
He's the only one who could get away with this...Imagine if someone tried this nowadays...We should all just kick back...and laugh at each other right? Rg

OMG! My jaw was on the floor. Everyone’s laughing in stereo; and I must say, the stereo audience sounds amazing; and my jaw’s on the ground. I DID hear someone say, “Oooooh!!” in an OMG way. He’s right, though, no one’s safe around him. I can’t even HEAR half the jokes I’m so appalled by the last one. His stories of sex with his wife are hilarious; it’s the only part where I can relax! Weird sex jokes are fine with me. I have to go there ‘cause the rest is, oh my gosh! He interrupts the, oh my gosh! with sweet moments of, “They’ve been married 4 days, folks! Give ‘em a hand!” The only time I laughed was when he stringed about a dozen quick slurs in a row – hilarious. He says, “You have to LAUGH at bigotry.” He changes everyone’s race for a ridiculous nonsensical skit with coerced audience participation mimicking fake indigenous peoples (What’s the correct term for these peoples these days?!!! I think it’s “Indigenous Americans” and they call themselves “Indians” in the casino commercials. I guess their marketing people know that the average US citizen won’t understand the word “indigenous?”). Okay, okay, a totally fucked up Indian skit where they’re making up fake Indian language and yelling at each other and it’s really funny…and so wrong. And I’m laughing. All his stuff, I can’t laugh at, but by the end I'm laughing an aweful lot. He has a sweet way about him, a very Vaudvillian sweet, stroke that audience, way about him. And as a finale he thanks the audience and sums the whole racist show up with a heart warming speech that says, We’re all in it together; Here’s proof that I’m not a bigot or non-American; and, Laugh while there’s time…or at least a number of things along those lines. It’s worded so perfectly that not only does he release himself from any wrong-doing, or racism, but he also not only releases you from the same for having laughed, but also commends you for supporting live performers and for laughing and making the most of your time. Pretty fucking clever!!! He's one of those comedians, like that black guy before Mind of Mencia, that you can't quote or take out of context because it is SO WRONG and most people can't pull that shit off, but in context it acually can make sense and be a release and be funny and poignant and soften those weird hard edges of society and life that we have to put up with day in and day out, all that fucked up hatred against imaginary ghosts that is pinned onto real people, he can turn into laughter and hopefully, at least for some, catharsis. And isn't that what live performance is about?

I never saw it comin. Thnx, A.