Les Legions Noire Part One: March To The Black Holocaust 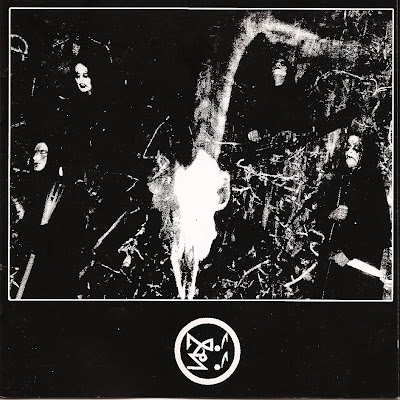 In the early and mid '90s a small, tight-knit, group of French musicians and bands calling themselves "Les Legions Noire" (The Black Legions) created some of the most unnerving and original "music" to ever come from the black metal scene. Ranging from eerie ambient works to scraping lo-fi black metal, there seemed to be no end to the imagination and eccentricity of the LLN. Most recordings were never released properly, or released in extremely limited numbers on cassette-only formats. These recordings are some of the most sought after ever. Even more confusing is the number of fake bands and bootlegs that claim to be authentic LLN output, and the existence of actual reissues by the bands themselves with new titles and artwork. To further distance themselves from the herd, many LLN bands adopted bizarre, otherworldly names such as Brenoritvrezorkre, Dvnaèbkre, Dzlvarv, Vagézaryavtre, Mogoutre, Vzaeurvbtre, Susvourtre, and Uatrb Vélèpr to name a few. The best known Black Legions bands were Vlad Tepes and Belketre. Sensational rumors of ritual abuse and animal sacrifice surrounded the scene, but to my seasoned ears, the whole affair sounds like bored French teenagers with an abundance of choice blotter acid and a Tascam MF-P01. Here I present the notorius split from Vlad Tepes and Belketre, also known as March To The Black Holocaust, it's as good a place as any to start looking into the outlandish world of Les Legions Noire. Here
Posted by Aesop at 12:13 AM

I aso grabbed this and am checking out the Vlad Tepes stuff as I type this. I did a search for some of those other weird ass named bands and came up with mydarkplace666.blogspot.com where I am grabbing any LLN French crap I can get my hands on. I have no idea why I didn't check more of this out back when Gossard was telling me about it. I did manage to pick of a pretty messed up Mutiilation cassette back then, which is super raw and fucked up. I also grabbed a cd which is disappointingly more together.

Yes, mydarkplace is a great blog, as well as dunkelheit (both in my links.) SO you know, Gossard, do we know one another?

Oh, and this post is just part one of many LLN related recordings, stay tuned.

lol yeah.. I didn't realize bob...zub bobzub, does that ring a bell?

this is a superb upload, many thanks for all your writing on this bizarre scene.

vlad tepes is amazing, i'm looking for all their stuff now.

Belketre has to be some of the nastiest black metal I have ever heard. Great post, thank you.

Just listening to Vlad Tepes now, great stuff, thanks for uploading. And no fancy software needed to open the file either, you rule :)

Great blog. Just stumbled upon it although I have been listening to this stuff for years...plan on spending some serious reading time here. Thanks.