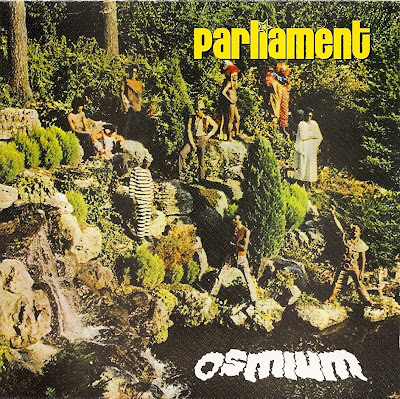 One could spend an awful lot of time trying to figure out what happened to a young Motown singing group called The Parliaments to cause them to transform into the band that would create Osmium, the 1970 album that is the subject of this post. My guess would be drugs and an exposure to the hyper-explosive rock of fellow Detroit bands, The MC5 and the Stooges. Either way, this was the ground work for what would become the trademark P-Funk aesthetic, although Osmium is heavier than than anything in Clinton's massive catalog, and surely they were aware of this because they opted to name the album after the heaviest of metals. Osmium is beyond eclectic, it is a wholly enjoyable mishmash of genres and styles, with lyrics ranging from socio-political commentary to straight-up misogynist hedonism. The performance is spirited, plucky and absolutely fierce. Chronologies regarding the weird career of Parliament/Funkadelic often overlook Osmium, claiming 1974's Up For The Downstroke as the first real Parliament album, this is probably due to just how fucked up Osmium is. It's kind of like Chuck, the older Cunningham brother from Happy Days who just disappeared after the first season to never be seen or mentioned again. Okay, maybe not exactly, but history has sort of glossed over what should be considered a classic.
Here
Posted by Aesop at 12:36 AM

i've been listening to this album a whole bunch in the past week. i just found out that the steel pedal player in my girlfriend's dad's band, played on "little ole country boy" when he was 16. pretty funny. this album rules!

One of my top three records EVAR!!!

man this album is ace!

those crazy funk people !what an excellent post - harry lime

this is making me so happy right now. thanks so much for all you share and the time you put into it. cheers

Thanks. I rather enjoy doing it.

This has to be one of the best albums ever made. Funkadelic is amazing by itself, Parliament had the hits, but this is the well-spring of genius. Pure, insane genius.

This is why I love music blogs.
I have never heard of this record before just now.
AND I can listen to it in... checking download manager... less than five minutes.

Seriously though, I wonder why this record was forgotten.

The weird thing is it was called Rhenium. Fucking genius. Hands down, this is the best album ever created by humans, aliens or inbetween.

Right, didn't Rhenium also have some of The Parliaments doo wop shit on it along with a few numbers from Osmium? I think I used to have that.

I was listening to them in the past few weeks and i just love them! theyre very diverse... sometimes funky, sometimes serious (Oh Lord)(or ironic, i havent figured it out yet...) and sometimes funny (Automobile). Great band!

good lord! thank you heaps yet again. man, they had such a good thing going...

Yeah, the good ol´times. Raw Funk, kitschy pop and weird ideas all in one and its simply the shit.