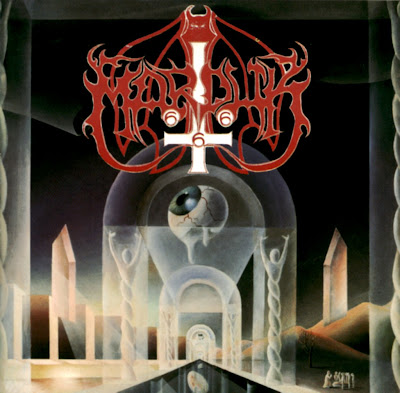 Marduk's first album, Dark Endless, was released way back in 1992 when Swedish Black Metal still had some things in common with Death Metal. I could write a thing or two on what I think is wrong with Marduk, but this album would be exempt from my ramble. Dark Endless is just too fresh-faced and eager. I can find no fault in young Marduk. Dark Endless is more of a thinner sounding Swedish Death Metal album than it is a Black Metal one, it even reminds me of the forceful bludgeon of Asphyx at times. Whatever they do now barely interests me, but Marduk's first album is way cool.

this blog is seriously pissing me off. almost every post is something that I have wanted to listen to, often something I already have on mp3, but just... can't. to explain: imagine the "hunger" for listening to music in terms of hunger for food. you/the average blog reader/pretty much everybody can, compared to me, eat a ten course meal, and will happily eat something totally different every day. I, on the other hand, can at most nibble, and on the same stuff day after day. doing otherwise results in indigestion, nausea, and so on. I almost literally feel sick if I exceed my listening-limit, and then for days afterward I can't listen to anything. it's like being at a feast, drooling madly at the stuff on offer, but unable to eat more than a couple of crackers.

sorry, this post is retarded and gay, but I needed to say this. gah.

Ah my favorite Marduk album too! You should check out their Rom 5:12 it's really good unlike the last three repetitive albums before it.

this is a pretty good fuck shit up album for sure

always thought they had theee cheesiest shittiest logo ever...

Thank You! Love your blog.

gonna check this out! and like previous posts said - ROM 5:12 IS good

Apparently, it's been reissued with new artwork. Why? Don't know. The new art isn't awful, but it's got nothing on the mindfucking awesomeness of that disembodied eye. I guess it's another case of an artist misunderstanding what made them great. I saw them live about a year ago. It was alright in a theatrical sense (and way better than Nachtmystium, who opened).