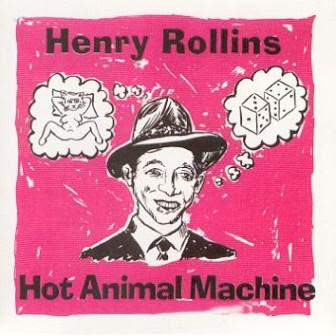 1986 and Black Flag was on shaky ground. Infighting, relentless touring and swollen egos threatened to rip apart one of the greatest bands of all time. Sensing the end, Henry Rollins assembled a kick-ass band and headed for the studio to record this pink thing called Hot Animal Machine. Part scorcher, part novelty record, Hot Animal Machine is a bit of a polarizing album. The album kicks off with three solid songs: "Followed Around," "Black and White" and "Lost and Found." Then we get "There's a Man Outside" rocking, yet lyrically and musically a bit monotonous. Next is a cover of Richard Berry's "Crazy Lover" which reminds us that Rollins, as well as being angry, has a sense of humor and a bit of a David Lee Roth type showman buried within his anguished persona. "A Man and A Woman" is an angular, discordant piece of skronky jazz which serves as a bed for a Rollins spoken word piece about domestic violence. The title track barrels in and pulls the album back to the intent of the first three cuts. Then two more cover songs, "Ghost Rider" by Suicide and "Move Right In" by The Velvet Underground. The whole thing falls apart rather brutally with "No One," a disjointed dirge that has Henry losing it. It's almost there to, once and for all, let you know that Henry has snapped despite all the fun you may have had with this record. Hard to believe he has a talk show now. Fantastic artwork by Mark Mothersbaugh of DEVO.
Here
Posted by Aesop at 12:00 AM

A MILLION "THANK YOU"S
I've looked for this for a long time.

I heavily appreciate this.

Oh man.
This is gonna be great!

This is great but the Henrietta Collins EP that comes with the re-issue of this is king.

Love the Henry Rollings psyche. Many thanks.

Nice, my copy of this disappeared years ago. I happen to love 'There's a Man Outside'. Delightfully paranoid.

The 'Drive By Shooting' twelver is amazing.