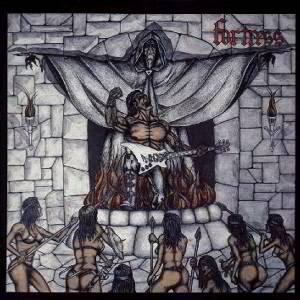 Get a load of that cover!!! Some kind of B.C. Rich-wielding barbarian emerging from a fireplace while Emperor Palpatine looks on. Oh, and did I mention the warrior women in thongs who have arrived to either hump that guy or kill him, or both? So how amazing should an album be to deserve such an image? Does the music inside live up to the promise of the cover? No. No it doesn't, unless you get all gushy over bargain basement later Judas Priest worship with dashes of Sunset Strip coke metal to get the party started. And it's a fucking party alright. However, it's the kind of party you go to in Missouri in 1985, not Hollywood. Relax, drink some Budweiser from a warm keg, flirt with a fat chick. Make the best of a bad situation and maybe it'll actually be fun. Besides, Fortress kicks off the party with the big rave up intro of "Metal Meltdown." The song is almost like a metal Mad-Lib with lyrics about liking it loud and fast and warnings to those who might try to impede your path to metal. Ever notice how the ballad (if there is to be one) is often the third track? Well, I have, and Fortress predictably offers up "Into The Night" which starts off with the trite lyric "Just 16..." blah blah, obligatory story of a runaway living fast on the streets. In fact all the lyrics on this album are so generic it's almost unbelievable. The riffs too for that matter.You've heard this album before, even if you haven't. Okay, I'm ready to admit this party sucks.

Maybe you should have an "art collectors" gallery blog where people can download covers like this in hi res. No music, just retardo outsider art.

shlocky metal at it's best!!!

Did these guys open for Battle Axe on the 'Burn This Town' tour?

Are you still planning on doing an additional blog? I remember you mentioning about a month ago.

Thanks for adding the link for me,response is slow going so far.Was it that way for you? How did you build the hype?

Still considering the other blog, time is kind of tight.

Send out a MySpace bulletin about your blog.

hey man, greetings from Finland. your blog is full of all kinds of awesomeness. rock on!